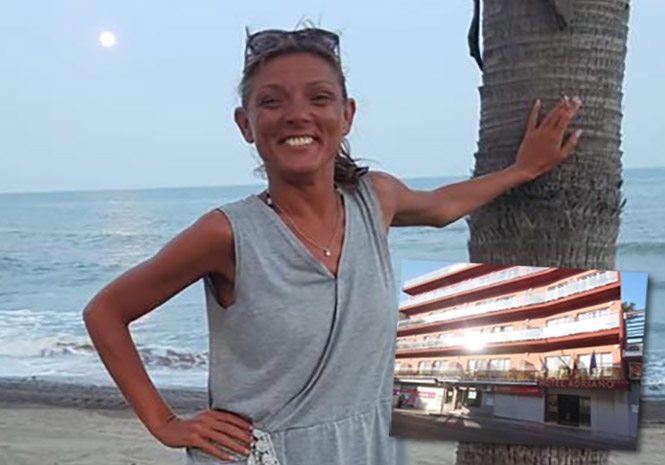 MISSING: Marie McManus and (inset) the hotel in Torremolinos where she was last known to have checked in to

A WORRIED family in the UK has reissued a public appeal to find missing Marie McManus who vanished more than four weeks ago on Spain’s Costa del Sol.

Expats living in southern Spain and holidaymakers – particularly in the coastal resorts of Benalmadena, Fuengirola, Torremolinos, Malaga and Marbella – are being urged to circulate her details and spread the word.

Marie McManus, aged 42, used her credit card to pay for a hotel in Torremolinos on July 8 – and the card was last used on July 11 in the same holiday resort town.

Her mum was the last person to speak to her on July 15.

Declan McManus, from Stockport, appealed, “If anyone happens to be in Benalmadena, Fuengirola or surrounding areas please keep your eyes peeled for Marie or simply get her to call my mum please!”

The Euro Weekly News was the first newspaper to break the story a week ago when Marie McManus, aged 42, hadn’t been heard from for over a month.

And now, speaking to his local newspaper in Manchester Declan has added, “Marie flew out to Spain, landing at Malaga then travelling to Puerto Banus and Marbella before going to Torremolinos, in early to mid May.”

He said she spoke to their mother Tina on July 15 using a stranger’s mobile she had asked to borrow to make the call.

She told them in the call that her handbag containing her mobile phone had been stolen.

And that’s the last contact they have had with her.

Declan told the Manchester Evening News, “We just want her to call one of us – just to let us know she is okay,” he said. “If she doesn’t want to come home that’s fine. We just want to know she’s safe and well.

He added, “Interpol has contacted my mother. A flag has been placed on her passport meaning she will be spoken to if she tries to leave a country via an airport or port. They will just be asking if she’s okay.

“We have heard she might have been getting a job on a boat somewhere but we are not sure.

“We just do not know what to do. We hope that she has just gone off the radar and does not want to be contacted – which is fine. We just want her to get in touch with us to let us know she is safe.

“We have been told by the police not to travel out to Spain because there is not much to go on.”

Declan urged anyone with information to contact the police in Spain, via the 112 emergency number, or the UK police on 101.