DO YOU KNOW THEM? Hunt on for brazen Costa ‘scumbag robbers’ 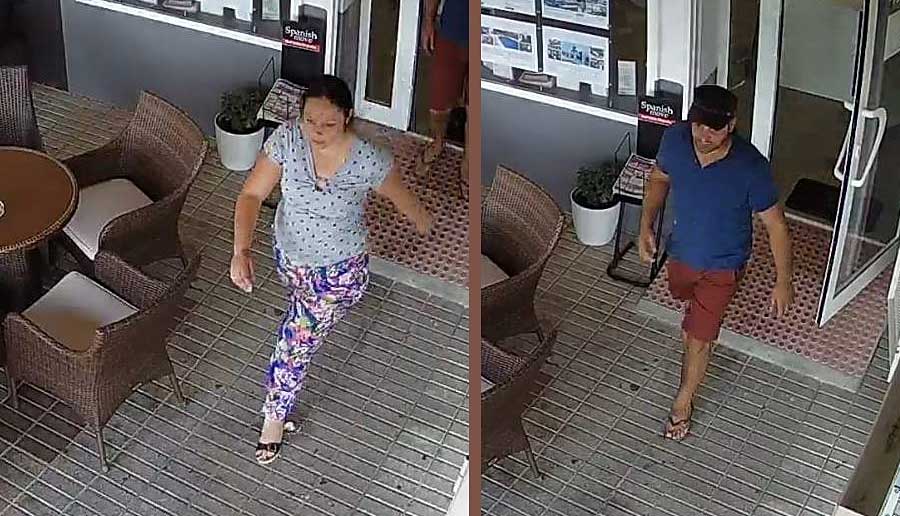 HUNT: Do you recognise the pair?

AN estate agent who physically threw a pair of “scumbag robbers” out of her shop in Spain is warning others to be on their guard.
Sarah Hayes of Huntley Properties in Mijas, on the Costa del Sol, said she was forced to physically fight and wrestle with the ‘brazen’ pair before they fled empty-handed.
And she has now launched her own campaign to track them down.
Sending a caution to others, the brave 60-year-old, said: “They were looking for anything they could sell on, laptops, phones, or handbags and cash. They are definitely career robbers, and have apparently been into around eight different businesses around La Cala.
“They work as a team, everybody needs to be careful.”
The incident unfolded when a man, thought to be Romanian, walked into the shop in Jardin Botanico, at 12.20pm, followed shortly by a woman, believed to be of the same nationality. “He was asking about launderettes and car hire, I knew there was something dodgy going on, he’s been in before,” said Sarah.
Minutes later the male suspect made his way towards a kitchen at the back of the agency.
“I asked where he was going and he just carried on, so I literally grabbed the back of his waistband, pulled him back and was grappling with him. I then kicked him in the back of his knees so that he lost his balance.”
It was then Sarah realised his female partner had taken her purse out of her bag.
“I ran at her, grabbed my purse and started pushing her towards the door.”
Sarah said she screamed continually as she forced them to leave.
Friend and fellow businesswoman Zoe Hayes, of Security of Spain, located next door, heard shouting and ran to help.
Sarah said: “Luckily I wasn’t hurt, I’m sure they are hurting more. It was a bit scary, my adrenaline was pumping, but it could have been a lot worse.”
She has since shared photos of the suspects and issued a caution to others on her Facebook page, which has already been shared 360 times.
In a comment, one woman said she thought they were responsible for trying to steal charity boxes’ from a local sandwich shop three months ago, adding: “They were in our office as well and got chased. Nothing is sacred.”
Sarah believes they have been operating in the area for a while.
“I have seen him in Jardin Botanico and I believe they are local, robbers by career. I’m sure they live near to Miraflores or Torrenueva area and do this for a living. Please, everybody, be vigilant at home or at work, these thieves watch us and spring when we are at not expecting it. Scumbags.”
The pictures captured on camera have been forwarded to the police who identified the car, a silver Volkswagon, but not the suspects. They are investigating.