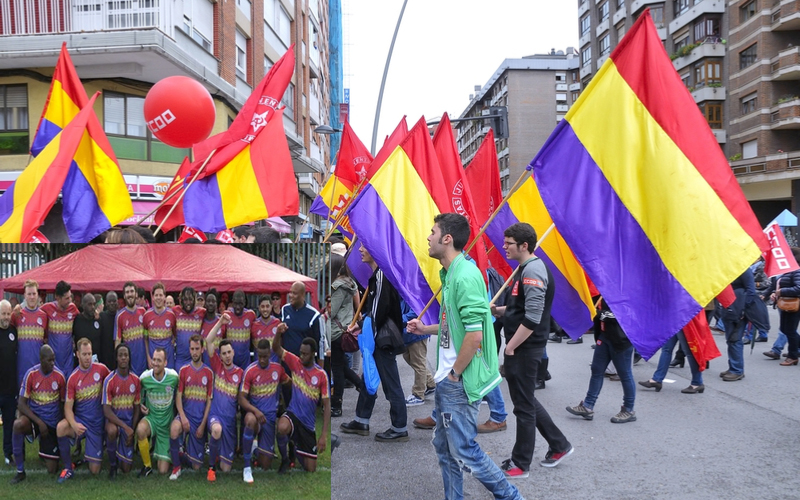 NO PASARAN: NON-LEAGUE football club Clapton wears a shirt with the colours of the Republican flag. Photo Credit: Shutterstock/Clapton CFC

NON-LEAGUE football club Clapton wears a shirt with the colours of the Republican flag, the three-pointed star of the International Brigade and Dolores Ibarruri’s slogan unprophetic battlecry No pasaran (They shall not pass).
Clapton is a far cry from Guadalajara or Teruel but the team chose the shirt from a selection of 16.
“I wanted to make something that marked the importance of the sacrifice of those who fought against fascism,” the shirt’s designer.
Instead of selling an expected 250 shirts, there are orders for thousands more because it is a sell-out in Spain.
All thanks and gratitude towards Juan Carlos and for what he contributed to the Transition in his younger days and his son Felipe is giving a thankless task his best shot but the Spanish are not genuinely monarchist.
There is general media interest in what Letizia or the Infantas are wearing and everyone loves a touch of royal scandal but there is still something about the colours of the Republican flag that provokes a stab of pre-Franco nostalgia.
Or there was until the unilateral declaration of the Catalan republic on October 27 when Carles Puigdemont went and gave Republicanism a bad name.
Boxing clever
SCOTTISH First Minister Nicola Sturgeon who was enthusiastically planning a Cataluña visit is cooling off.
This has cheesed Scottish nationalists who like to see parallels with Cataluña but they can look for them until they are blue in the face and under their kilts but the similarities are few.
Cataluña has never suffered under the Spanish in the same way that Scotland suffered centuries ago under the English unless you count Franco’s repression, which was felt all over Spain and was even more savage in some of the country’s other regions.
Not that Sturgeon is cooling off about Scottish independence.  Instead she’s boxing clever because if that happens, Scotland would have to apply straight away to rejoin the European Union.
The last thing Edinburgh wants is a future Spanish veto that would result from cosying up to the Catalan separatists for the benefit of the pro-independence vote.
Help from above
PABLO IGLESIAS and Irene Montero are now the parents of twins, but the boys Manuel and Leo arrived ahead of schedule in July at 26 weeks.
The couple – supremo and sub-supremo of the Podemos party – recently issued a statement, thanking the Gregorio Marañon hospital in Madrid for the care the babies have received and are receiving there.
Although the couples are republicans, the communique said, the King and Queen asked after the twins “and all our political rivals frequently wanted to know how they were” they said.
“We are atheists but will explain to our children that our friends who are believers prayed for us.  The Virgen del Transito, Santa Rosa de Viterbo and Santa Maria Liberatrice were asked for help (and one never knows…).”
Indeed one does not, which is why Santiago Carrillo, leader of the Spanish Communist Party between 1960 and 1982 happily described himself as a “god-fearing atheist.”
Wrong target
SPAIN’S Minister of Labour Magdalena Valerio described the newly-created prostitutes’ trade union OTRA as an own-goal.
“This is one of the biggest upsets of my political life,” she fumed, and plans to annul the legalisation.
Prostitution is supposed to be the oldest profession and unfortunately pimping is the second-oldest.  Valerio should instead devote her energies to eradicating that and the people-trafficking and drugs trade it involves.