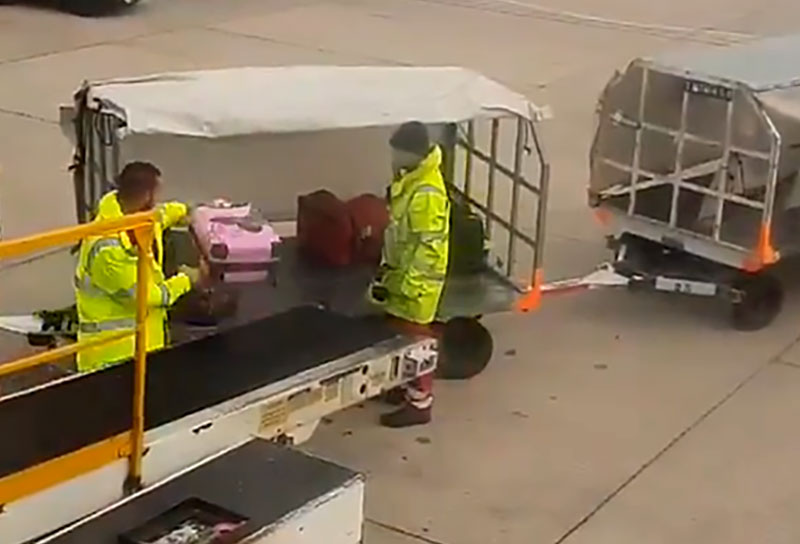 A MAJOR airport in the UK has vowed to crack down after a baggage handler was filmed by a Ryanair passenger flying in from Spain as they tossed her suitcase into the air and onto the ground.
Passenger Elizabeth Evans posted a video (see below) that went viral and has received more than 1.5m views of the baggage handler mishandling the luggage as it was offloaded from flight FR3233 from Malaga to Manchester.
She took to Twitter to tell Manchester Airport‏: “Thank this member off staff for ruining my new case !!! Ryanair flight from Malaga.”
Twelve hours later she was angry that they had not responded to her – so she took to Twitter again.
And now Manchester Airport has vowed to crack down on the mishandling of luggage and asked the ground handling company Swissport to ban the staff in the video from working at the airport site.
In a statement Andrew Cowan, Manchester Airport chief executive officer, said: “Manchester Airport will not tolerate the kinds of behaviour shown by the employees of the ground handling company Swissport.
“We are clear that it is completely unacceptable for our customers’ belongings to be treated in this way by any company operating on our site.
“The behaviour of the Swissport employees falls well below what we would expect of ground handling agents at Manchester Airport. We have sought urgent assurances from Swissport that a full investigation will be carried out and swift and robust action taken against those involved.
“In our view, the actions of the individuals concerned are so serious that we would expect Swissport ensure they do not work on the airport site in the future. We have also asked Swissport to carry out an urgent review of their recruitment and training processes to ensure their employees are clear about the high levels of customer service that are required.
“If we are not satisfied by Swissport’s response to these issues we will consider what further steps are required to protect passengers interests including the full range of sanctions that are available to us as part of Swissport’s operating licence.”
A spokesperson for Swissport said: “We are disappointed by the video footage circulating on social media. We apologise for the behaviour of this individual, which is unacceptable and will not be tolerated.
“Swissport employees are well-trained in baggage handling and we will use this incident to remind all staff of our duty of care with passengers’ belongings.
“This was an isolated incident and we have taken immediate action. A full investigation is underway in relation to this behaviour. We cannot comment on specifics while the investigation is ongoing, however, Swissport is taking this matter very seriously.”

@manairport thank this member off staff for ruining my new case !!! Ryanair flight from Malaga pic.twitter.com/dEyaxPOraS