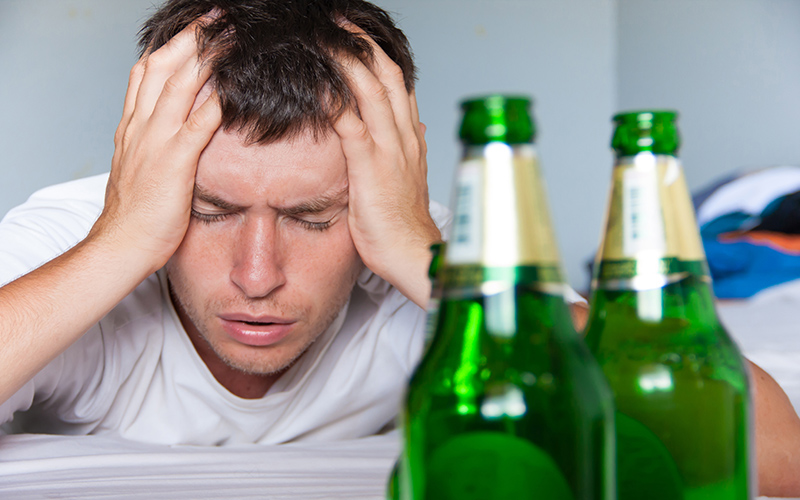 NO CURE: But there is evidence behind what works to relieve hangover symptoms and what doesn’t Photo Credit: Shutterstock

MOST of us have at least once woken up with a throbbing head and dry mouth and sworn ‘I’m never drinking again’.
What seems like a good idea the night more often leads to a miserable day after.
Heavy drinking can lead to inflammation of the stomach and intestines, poor-quality sleep, and the production of toxic substances that lead to vomiting, sweating and an increased heart rate.
Hangovers can also hamper the ability to concentrate and affect short term loss, according to experts.
And despite the majority of the adult population having endured one at some point, nobody seems to be able to provide is a credible ‘hangover cure’.
Although there is evidence behind what works to relieve symptoms and what doesn’t.
The most frequently reported symptom of a heavy night drinking is dehydration.
Alcohol is a diuretic and makes us urinate more often and around four drinks can eliminate between 600 and 1,000 ml of water from the body.
Heavy alcohol consumption can also cause sweating, vomiting and diarrhoea, which also cause the body to lose fluids, and lead to thirst, weakness, dry mouth and light-headedness.
Drinking water may relive some of these symptoms, but a combination of water and an electrolyte supplement is more effective in tackling some of the symptoms of your hangover.
While plate of greasy bacon and eggs swear by a full fry up, others can’t face it after a hard night partying.
Foods such as bacon, eggs and even broccoli contain an amino acid called ‘cysteine’, which scientists claim can decrease the amount of the toxic chemical ‘acetaldehyde’, which is produced as your body metabolises alcohol.
Acetaldehyde contributes to hangover symptoms such as increased heart rate, nausea and vomiting, but there is limited research supporting the benefits of certain foods as hangover cures.
However, eating protein, fat and carbohydrates before drinking has been shown to slow the absorption of alcohol.
One reason we feel terrible after drinking is down to the effects that alcohol has on our sleep.
Alcohol-induced sleep can be shorter and poorer quality, but the tiredness you feel can be reversed by the nation’s favourite stimulant – caffeine.
Then there’s the common phrase, ‘hair of the dog’.
But experts stress drinking during a hangover is simply dangerous, as vital organs such as the liver need time to repair the damage caused by a heavy session.
Government guidelines recommend that you should avoid alcohol for 48 hours after a heavy drinking session.
Pharmaceutical products are being marketed to drinkers which claim to relieve hangover symptoms by increasing the speed at which the body gets rid of the toxic chemical acetaldehyde.
But there is currently no evidence that any conventional or complimentary medicine can cure a hangover.
The only sure fire way to avoid hangover hell is to apparently drink alcohol in moderation or not at all.