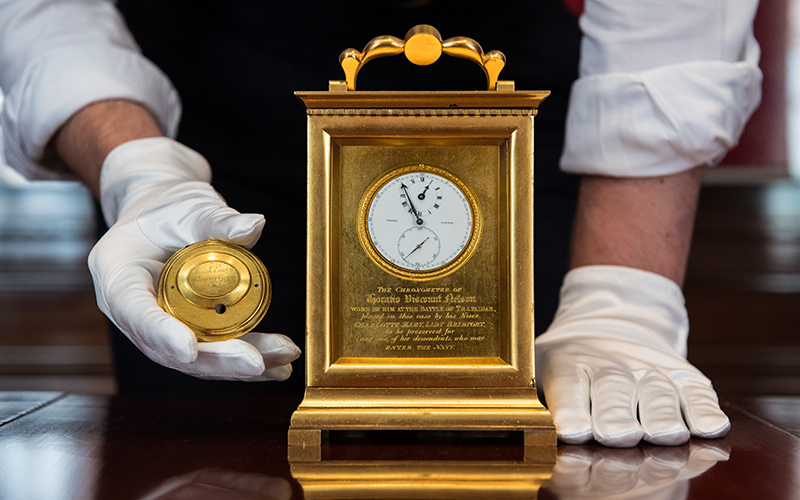 “Five minutes makes the difference between victory & defeat.” – Horatio Nelson
MORE than two hundred years after the great sea battle at Trafalgar on the 21 October 1805 Nelson’s pocket watch came up for auction.
This watch belonged to the great British hero, Lord Admiral Horatio Nelson, and set the pace of one of history’s greatest naval battles. Now mounted in a gilt-brass carriage clock case, this pocket watch is thought to be the timepiece carried by the Admiral during the Battle of Trafalgar.
Chairman of Sotheby’s International Watch Division, Daryn Schnipper said: ‘The perfect timing of the British assault at the Battle of Trafalgar was key in the historic victory of the Royal Navy so to be able to offer for sale the watch that Nelson probably used to establish the timing for this decisive battle, is a real privilege.”
The victory at Trafalgar was partly achieved through Nelson’s innovative military tactics in which precise timing played a key part. On the morning of the Battle of Trafalgar, William Beatty – the surgeon aboard Nelson’s flagship HMS Victory, observed how before the battle commenced, the Admiral called upon his lieutenants to synchronise their watches to the time on his own watch. It is therefore quite possible that the tumultuous events of that historic day unfolded to the time kept by this very watch.
Nelson possibly acquired this Emery pocket watch No. 1104, or was given it by an admirer, following his triumph at the Battle of the Nile in 1798. Given its extraordinary quality, it is unlikely that he would have been able to purchase such a luxurious item from his own means.
One of the nineteen relics returned to Nelson’s mistress, Emma, Lady Hamilton, following his death, the watch was inherited by the Admiral’s brother, William, and subsequently passed to his sole surviving child, Charlotte. Charlotte arranged for the watch to be mounted in its current form as a carriage clock, presumably so it could be better admired and treasured as her most precious possession.
This watch is one of a handful of Nelson’s possessions known to have survived and still in private hands.
No. 1104, is of the smaller size used by Emery for his Lever watch series. The term Lever refers to the escapement which is the part within the watch movement that allows the watch to run consistently and is one of the most important components in a precision timepiece. This watch is made to the highest standards, this is evident even today. Every part of this watch will have been finished by hand. Indeed this escapement was so difficult to make that its creator, Thomas Mudge, had little time for it and passed on its secrets to Josiah Emery as a maker who might be able to produce it. Emery created this series of watches in conjunction with his struggle to conquer the problem of Longitude.
It is a testament of the importance of this series that not only was an example used by Lord Nelson, as his personal watch during an historic battle, but interestingly it has probably been used by you as well. This is because nearly every mechanical watch produced today uses a form of lever escapement.
For so many reasons an ‘Important Watch’ Sold at Sotheby’s 365,469 Euro or £322,000 Sterling.