WALK OVER: Expats striking against cancer 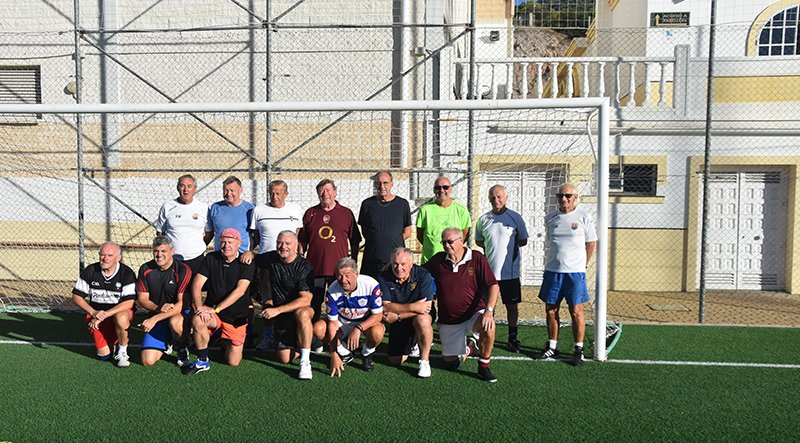 AN EXPATRIATE walking football club are working to tackle prostate cancer after members of the team were diagnosed with the illness.
The Walking Football Spain club, which meets weekly in Benalmadena, San Pedro and Elviria, has organised a show featuring Costa del Sol based comedy acts. All proceeds will to go to prostate cancer appeals, the club said.
The club also took nine of its members for blood tests after team members Jim King and Steve Whitehouse were diagnosed with the illness. Both are now recovering and their cancer is in remission.
Walking Football Spain’s efforts follow Prostate Cancer Awareness month, which takes place every September.
Brian Gregory, 69, from Elviria, is president of the club. He spoke to Euro Weekly News ahead of a game in Benalmadena Pueblo last Monday about their efforts to raise awareness for the illness and improve their members’ health.
The game also saw EWN’s head of sales Steven Euesden take to the pitch in support of the club’s efforts.
Mr Gregory said he was prompted to take action after one team member died during a tournament in Portugal last year.
“He was one of the youngest and fittest members of the team but he died suddenly of a heart attack.
“That made us realise we ought to be more conscious of our health. We brought defibrillators for the club and some of us have gone on first aid courses,” Mr Gregory said.
Mr Gregory added the diagnosis of Mr King and Mr Whitehouse encouraged him to send out a newsletter inviting club members to take prostate cancer tests.
Mr Gregory said the team was a great group who had come together and benefitted from the new lease of life walking football had offered them.
“We’ve been going about 18 months now and are going from strength to strength.
“We have members in their 70’s and one in his 80’s. Walking football’s given them a chance to take up a sport they thought they’d have to give up earlier in life,” he said.
Steven Euesden said he wanted to thank the team for letting him take part and encouraged anyone interested to sign up with the club.
“What a fabulous bunch of guys. They are all very welcoming to a newcomer and the fact they are doing this to raise awareness for cancer is typical of a great group of people. Keep up the good work,” Mr Euesden said.
Mr Gregory said anyone interested in joining the club or coming to their comedy night could visit www.walkingfootballspain.com or the Facebook page Walking Football Spain.