Size is not the point! 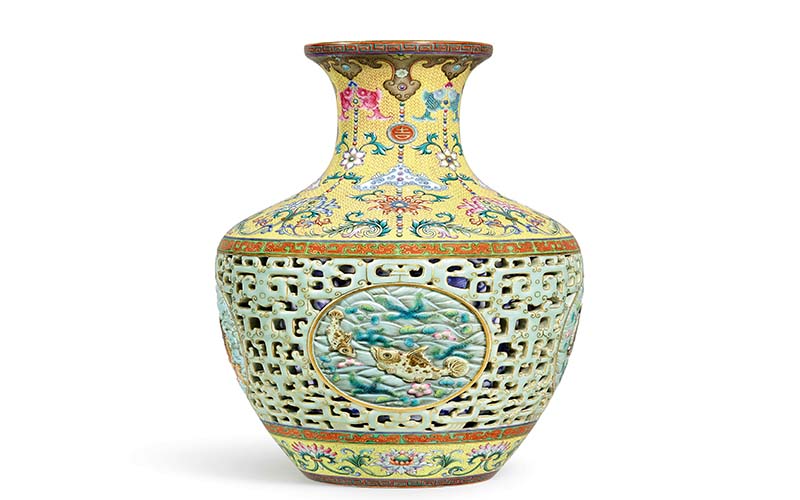 An auction in Hong Kong during April saw competitive bidding drive the valuation of a Famille-Rose porcelain bowl to euro 24.7 million.
It’s happened again. At a Sotheby’s auction in Hong Kong on the 3rd of October 2018 the Yamanaka Reticulated Vase recently discovered in a Private Japanese Collection sold for Euro 19,749,200 (US$19,009,102 £14,637,024) almost three times its pre-sale estimate euro 5.6 – 7.7million or US$6.4-8.9 million.
Bidding opened at HK 40 million (euro 4.4 million) and rose steadily as five bidders competed for the vase.
The Yamanaka is a pair to the famed Bainbridge Vase which hit global headlines when it sold in the UK in 2010, this example had remained; dormant and unknown to the wider world, in Japan for almost a century since its acquisition in 1924 following a public showing with Yamanaka in New York in 1905.
Carved and exquisitely painted with four pairs of fish below Rococo-inspired motifs on a yellow sgraffiato ground. Sgraffiato a technical term used to describe the application to an unfired ceramic body of two successive layers of contrasting slip or glaze, and then ‘scratching’ so as to reveal parts of the underlying layer. The exceptional famille-rose reticulated vase is skilfully modelled with an inner blue-and-white vase. It ranks among the most complex porcelains ever commissioned by the 18th Century Emperor of China, Qianlong.
This porcelain masterpiece is not only a reflection of the exacting standards on technical proficiency but also the insatiable demand for stylistic novelty at the court of the Qianlong Emperor, but also an aesthetic representation of the cultural confluence of East and West at its pinnacle in Chinese history.
Reticulated yagcai vases with double walls represent one of the last great innovations introduced by Tang Ying, the imperial kilns’ creative supervisor.
When peering through the outer shell, the Emperor would have had a real surprise, since nothing on the outside of this vase would have prepared him for what there is inside.
Also at auction that day was an outstanding Falangcai Poppy Bowl, arguably one of the greatest examples of Qianlong falangcai porcelain in private hands, also achieved the exceptional price of Euro 18,778,500 / US$21,600,158 / £16,632,138.
Unassuming in its beauty, the bowl is exquisitely enamelled on the exterior with an intricate design of poppies issuing from rockwork, with a butterfly depicted fluttering gracefully overhead, a fourteen-character poem, and the interior with a finger-citron, apple and cherries.
Some of the most valuable and valued objects are diminutive, rare and exquisite.