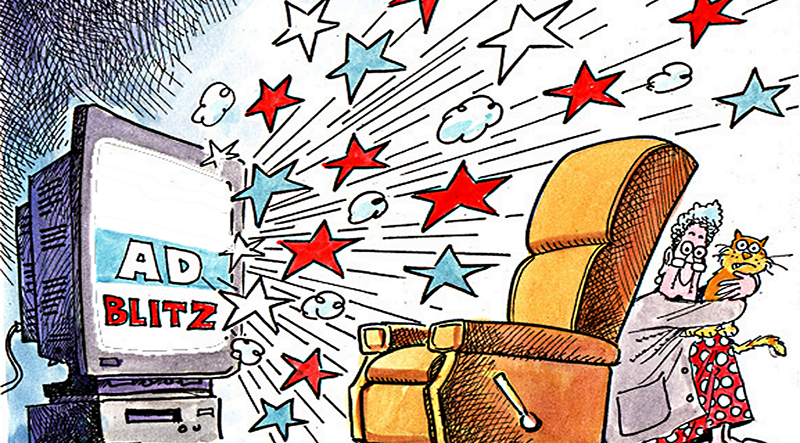 PITY the poor American TV couch-potato, who has to endure up to 20 minutes of commercials every hour. Often at peak volume, barking out excruciating exhortations to buy everything from haemorrhoid creams to legal assistance for problems you didn’t know you had.

Spain has ‘only’ 15 minutes of ads an hour, though the EU hopes to standardise commercial breaks to 12 minutes.

Happy days for the Brits, even disregarding the glorious ad-free environment of the public BBC: UK broadcasters ITV, Channel 4 and Channel 5 show an average of just 7 minutes of commercials an hour.

Advertising is the price we pay (increasingly) for getting stuff free. When that nice philanthropist Jeff Bezos of Amazon offered to sell us Kindles at cost price if we’d put up with ads on the home screen, rivals thought we’d never buy it. Amazon has since sold tens of millions of ad-subsidised ‘Special Offer’ Kindles.

But are we heading for ‘peak ad’? The willingness of increasing numbers of people to pay subscriptions for their ad-free ‘content’ suggests many of us have simply had enough. As growing numbers of viewers desert the traditional commercial TV channels, is regulating how much time advertisers can spend trying to sell us stuff a little like shuffling those proverbial Titanic deckchairs?

Eyebrows went skywards last year when a survey insisted the average American is exposed to at least 4,000 adverts a day. A sceptical reporter decided to check. He gave up counting when he got to 487 and he was barely past breakfast.

What to do when an overwhelmance of ads gives us the screaming habdabs?

Of course we can switch off, and some of us do. Or we can subscribe to on-demand TV without ads.

Here’s a more practical option for those of us who (still) love the so-called ‘free to air’ TV channels and want to buck the trend which will see most folks in the developed world buying four monthly ‘content’ subscriptions by 2020, with younger folks supporting a ten-a-day habit.

No, that doesn’t mean heading into the kitchen four times an hour to make a cuppa, for bladder or for worse.

Don’t watch live TV. Record it, and zap through the ads. Easy-peasy.

Assuming you’re watching via a traditional antenna or a satellite dish, just replace your tuner or decoder with a TV recorder for somewhere between €100 and €200.

But good luck when the thing starts gaining on you. When you’re recording more than you can possibly watch, welcome to the club.

Zap with the doo-dah

GROWING numbers of TVs now have built-in recorders, and a price-tag to match.

For those of us further down the food chain, standalone TV tuner-recorders range from analogue models for TV coming into our homes through a traditional antenna, to the newer ones for satellite.

Gone are the days when programming your VCR took a degree in electronics – or a passing six-year-old. These days you just pull up the programme guide, find the show you want and press the big red button.

Even if the programme moves, technology will do the rest when it airs, and if it’s a series it will even record every subsequent episode.

Then sit back to prove my personal contention: that some commercials actually make more sense viewed at x8 or x16.