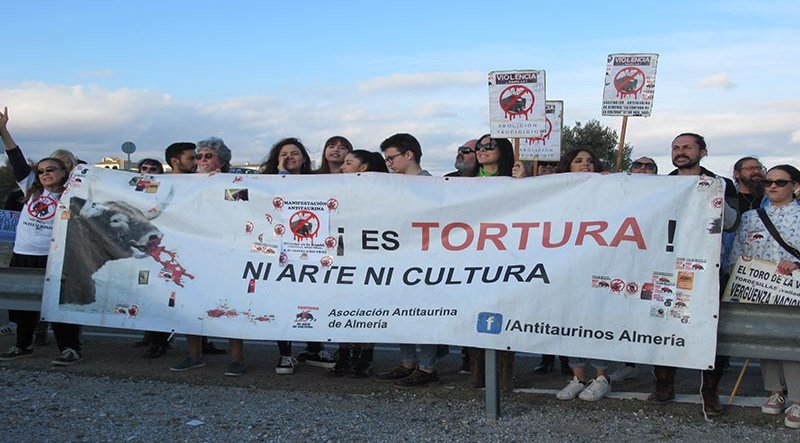 BRITISH residents joined protestors voicing opposition to the reappearance of bullfighting in Albox for the first time in more than 15 years, taking part in an Antitaurinos Almeria demonstration last Saturday afternoon at the temporary bullring in La Molata.
Speaking to the Euro Weekly News, Albox mayor Francisco Torrecillas defended the council’s decision to include bullfighting on the All Saints Day fiesta programme.
He stressed the decision had been a response to requests his administration had received from numerous local bullfighting enthusiasts, pointing out bullfighting has ‘national fiesta’ status.
“I profoundly respect people who are against bullfighting, including all the foreigners who live here with us”, he added however.
“It’s their right to express their opinions.”
Certainly plenty of people filled the bullring. “It’s a tradition here”, said Bernadino, who was at the event with his family.
“They don’t understand the fiesta”, said Manuel Gutierrez of the protestors. “They don’t know about the money it generates.”
Joaquin Horta, who works for the company which staged the bullfights, and is a mozo de espadas (sword page), reckons people who are against it don’t take into consideration the privileged life of the bulls before they appear in the ring and the “sacrifices” of the bullfighters.
On the other side of the argument was protestor Audrey Bullen, describing it as “unspeakable” and “barbaric” that anyone “enjoys the deliberate torture and suffering of an animal to its inevitable death.”
Sandra Smith, was surprised by how many people had brought children along, saying she hoped the protest would help change minds as “no animal deserves to be tortured.”
“There is no tradition, culture or art in something which is the suffering of a living creature”, insisted Amparo Rodriguez, describing it as “perverse” to “rear a living creature to cruelly torture it in the end.”
She said the return of bullfighting to Albox was “an enormous step backwards in a civilized society.”