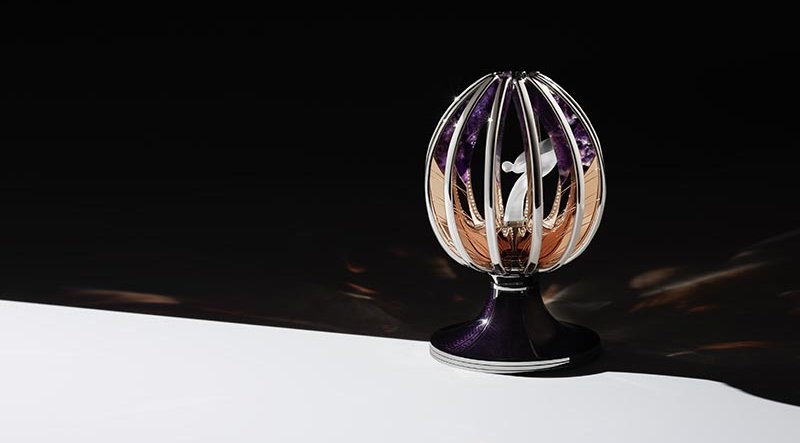 : EGG-CELLENT: This intrinsic design is contemporary and unique. Credit: Rolls-Royce

JUST fifty pre-1917 Imperial Eggs were completed, the exceptional creations are some of the most valuable and coveted objects ever to have been made.
Now in a contemporary fashion a new Fabergé Egg has been created. Two of the world’s most esteemed houses of luxury have joined forces to create one unique object for one discerning patron. Rolls-Royce Motor Cars and Fabergé announced the ‘Spirit of Ecstasy’ Fabergé Egg.
For the first time in history, an example of the Spirit of Ecstasy, the mascot of Rolls-Royce motor cars since 1911, is cocooned in an exquisite, contemporary, Fabergé Egg. The design, conceived by Rolls-Royce Designers Stefan Monro and Alex Innes and rendered by Fabergé Lead Designer Liisa Talgren, has been brought to life by Fabergé workmaster Paul Jones, creating a contemporary interpretation of one of the world’s most fabled and prized possessions.
Sean Gilbertson, Chief Executive Officer, Fabergé said, “A unique moment in both our companies’ history, the creation of the ‘Spirit of Ecstasy’ Egg represents the meeting of two masters of unrivalled quality and design, showcasing two globally recognised symbols – the Fabergé Egg and the Spirit of Ecstasy.”
The commissioning of a Rolls-Royce motor car is often a seminal moment for the patron, so too is the commissioning of a Fabergé Egg.
This Egg is destined for a great collector of both brands.
A team of seven craftspeople from Fabergé undertook the challenge of fabricating the design using the finest materials married with their extraordinary skill as artist jewellers. At first glance, the Egg is unmistakable in its character.
Design cues from Fabergé’s heritage are masterfully woven into the intricate design which stands at 160mm and weighs just 400g, with the Egg harnessing the ‘surprise and delight’ attributes for which Imperial Eggs are celebrated.
The Egg rests on an engine-turned, hand-engraved, purple enamel guilloché base of 18-carat white gold. Arms of rose gold define the shape of the Egg, acting as a protective chamber for the Egg’s precious inhabitant.
Upon operating the movement via a discreet lever at the base of the stand, a sense of theatre ensues as the boughs open to present the fine figurine of the Spirit of Ecstasy, hand-sculpted in frosted rock crystal, standing nobly in her opulent surrounds.
The rose gold vanes, embellished with nearly 10 carats of round white diamonds, resolve into swathes of natural amethyst weighing over 390 carats, specially selected for its colour saturation and quality.
The purple hue of the enamel and amethyst provide a playful nod to the use of colour found in Fabergé’s heritage.
Torsten Müller-Ötvös, Chief Executive Officer, Rolls-Royce Motor Cars, commented, “’The Spirit of Ecstasy’ Fabergé Egg was born from an intrinsic desire to further the realms of Bespoke personalisation.
Responding to the continuing demands of patrons in search of unique and cherished possessions, a designer at the House of Rolls-Royce sketched an Egg, igniting a fascination that will undoubtedly become one of the most collectable items of modern times.”
The ‘Spirit of Ecstasy’ Fabergé Egg was first displayed at Rolls-Royce Motor Cars in Goodwood, West Sussex, England, to a gathering of guests on the 23 October, 2018.
The Egg will then be on public display in Fabergé’s London shop window this Christmas seeking one careful owner.
Nick Horne, London, England