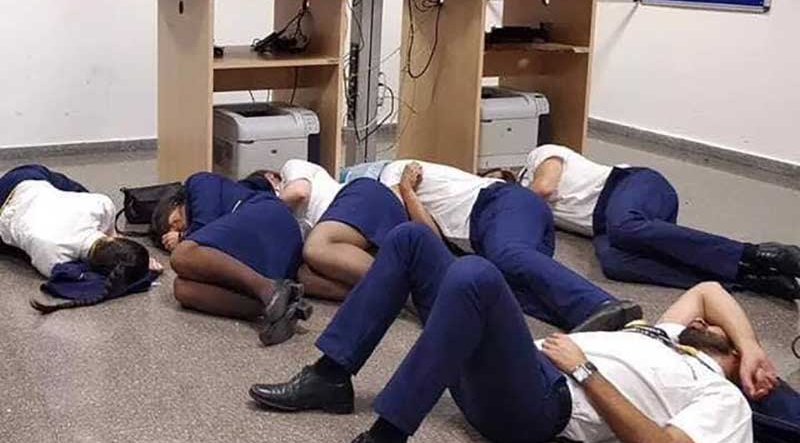 RYANAIR: Release video to prove the photo of crew 'sleeping on airport floor' in Spain was fake. Photo credit: Twitter

SIX cabin crew members who staged a photo of themselves ‘sleeping on the floor’ of Malaga-Costa del Sol airport after delays caused by bad weather have been sacked by budget Irish airline Ryanair.
The six were part of a group of eight pilots and 16 cabin crew based in Portugal and the SNPVAC union has confirmed they have all been fired.
The image was staged by the crew to protest at their treatment in the early hours of October 14 after their delays caused by Hurricane Leslie. The original post was captioned:  “This is a Ryanair 737 crew based in Portugal, stranded in Malaga, Spain a couple of nights ago due to storms.
“They are sleeping on the floor of the Ryanair crew room. RYR is earning €1.25 billion this year but will not put stranded crews in a hotel for the night.”
At the time the airline said: “Due to storms in Porto (13 Oct) a number of flights diverted to Malaga and as this was a Spanish national holiday, hotels were fully booked. The crew spent a short period of time in the crew room before being moved to a VIP lounge, and returned to Porto the next day (none of the crew operated flights).”
Ryanair COO Peter Bellew had said: “Unfortunately. All hotels were completely booked out in Malaga. The storm created huge damage in Portugal. Later after this the crew moved to VIP lounge. Apologies to the crew we could not find accommodation.”
Luciana Passo, head of the SNPVAC cabin crew union in Portugal, confirmed the sackings, described the airline’s reaction as ‘awful’ and said: “The union’s legal team are now dealing with the matter.”
After the incident the low-cost carrier released CCTV video footage showing how the crew laid down on the floor to pose for the picture that went viral on social media.

‘STAGED’: Ryanair insist no staff slept on floor of airport in Spain as flights diverted due to storms