Trunk makers to the creator of Sherlock Holmes 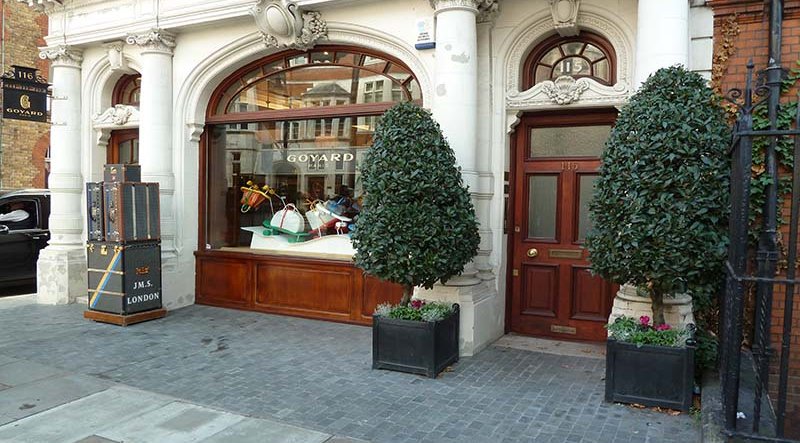 EXCLUSIVE: One in one out is the rule at Goyard.

MOUNT STREET is an almost quiet almost secluded street in the heart of Mayfair, London.
People walk and hyper cars glide though this locale, which is home to one of the most select of London hotels The Connaught.
Mount Street also hosts globally select retailers of high end watches, shoes, clothing  and restaurants, but of primary interest to me is that Mount Street is also the home of the London outlet of a 165 year old brand that you may not have heard of – Goyard.
Goyard do not advertise and they do not give interviews. In 1998 Jean-Michel Signoles and his sons bought the company and took it private. With a heritage stretching back to before 1853, it has had several owners whose names successively adorned a company with a growing elite patronage. Originally located at 4 Rue des Capucines, Goyard moved to 233 rue Saint-Honore, Paris, the year before the now globally famed trunk makers Louis Vuitton opened on the rue des Capucines.
Goyard have remained at 233 Saint-Honore, Paris ever since. Over the decades select outlets were opened to serve their discerning clientele. The first outside France was in Mount Street, London.
Celebrity customers included the Duke and Duchess of Windsor as well as Catherine Deneuve. Contemporary celebs and customers including Madonna, Victoria Beckham and Carla Bruni Sarkozy have been spotted wearing Goyard.
What is the enduring appeal of Goyard? Perhaps it’s their clutch bags or their tote bags that are so exquisitely a la mode, though costing from a mere £700 and upwards. Your trunk will cost rather more.
Perhaps it’s the fact that they still make luggage the way they did more than a century ago. As Goyard put it, everything is possible. “Champagne trunk, tea trunk, polo trunk, caviar trunk, bicycle trunk, gardening trunk, fishing trunk, picnic trunk, everything is possible, from the classical to the extravagant, and each customer’s imagination is the only limit, as exemplified by Sir Arthur Conan Doyle’s legendary trunk, which included a fully-equipped office, or Alain Ducasse’s state-of-the-art culinary trunk.”
A seductive boast and challenge, under scored by a total commitment to customer service. A hint of which you too may confirm on Mount Street. The door is guarded, not against the light fingered but to ensure that no more customers may enter than there are staff to individually serve. One in and one out. When you visit Goyard you know you are the centre of attention.