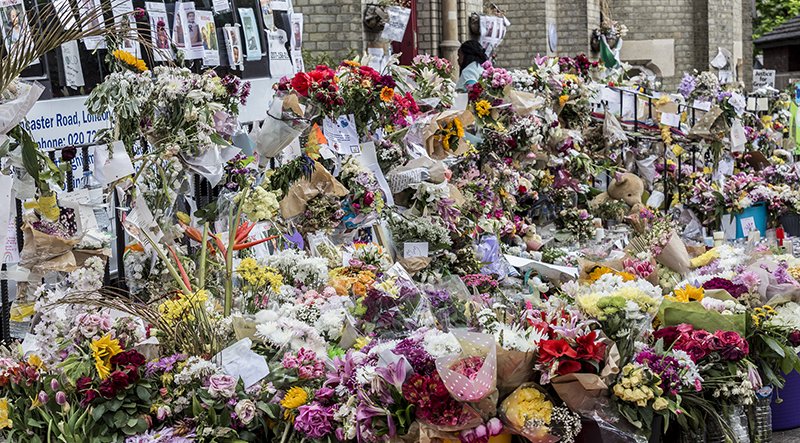 SYMPATHY: Leapy has previously stated his sympathy for victims of the Grenfell Tower fire.

JUST when you think you’d heard it all…this week’s blurb comes to you all the way from sunny Fulham SW6.
It is a beautiful autumn day, the leaves are piling up in a multitude of magnificent hues and the sun is beaming down from a pale blue cloudless sky.
Unfortunately the ol’ boy is writing this from his sick bed. I’m just laying here with a temperature, feeling like death, listening to the vaguely muffled voices of people, wafting up from the street as they go about their Sunday rituals.
The fact that I’ve heard not one word of English so far is not going to influence this week’s piece one tiny bit, promise!
No, what I have done of course, is tune in to the EWN online. As ya do. And (sigh) I really do feel it’s once again time to set the record straight.
Last week, word reached me on Mallorca (from the council offices no less) that they were under the impression I had served a prison sentence for murdering my first wife!
The same week, a close friend confided in another, that they had always been under the impression I had indeed committed murder and done time for it.
Well I can categorically inform all concerned that, although I did serve time for an affray in a pub 40 years ago, (an event well chronicled) these rumours are complete rubbish and, to be quite honest, I do often find them quite amusing.
These tall stories are usually embellished by the narrators to make as much impact as possible on the listener and are, to my way of thinking, fairly harmless and don’t bother the ol’ boy one iota.
Not in the same category however was the missive printed on last week’s letters page.
It is plainly libellous and I should have certainly been given the opportunity to ask for proof of the insinuations.
The letter stated that in a past column Leapy wrote. “In my opinion the victims of the Grenfell tower block disaster would have rather died than be woken up at that ungodly hour”.
Well I can quite categorical inform all involved that I would never even consider writing something as evil and inappropriate as a remark like that.
The only way that would have ever even possibly got into the column, would have been as an example of my disgust at people who could make such distasteful jokes in the wake of such tragedy; and even then I am pretty certain I would have found it too abhorrent to include in my piece.
Sometimes these rumours can be taken just that little bit too far and this accusation has done just that.
Unless it can be proved and the column in question produced I demand an immediate apology from the writer or Leapy’s wrath will be invoked beyond peril.
Just to put minds at rest that they may have been have been hob knobbing with a murderer, I’m really looking forward to spending Christmas with my Irish family, which of course also includes my first wife. Kicking and very much alive.
T’be sure, T’be sure!
Keep the faith
Love Leapy
[email protected]