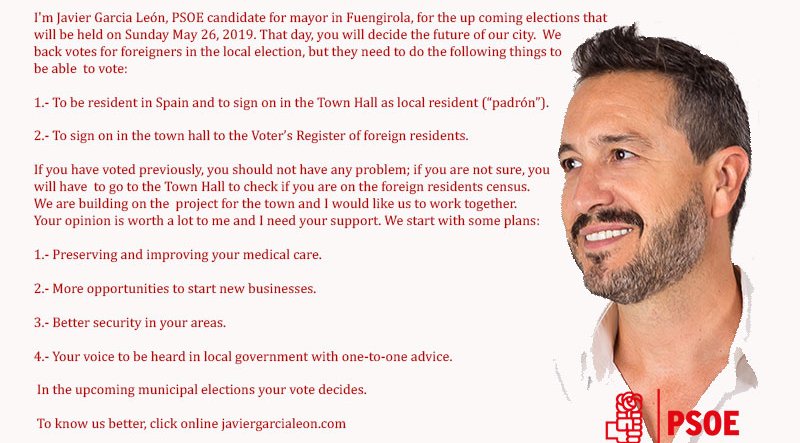 The percent of foreign´s resident in Fuengirola is about 40% of the census, being 20% from United Kingdom. Therefore, the Socialists have launched a campaign to make known in different languages what they must do to be able to vote in the next municipal elections.

The candidate for mayor, Javier García León, has presented this morning, accompanied by several colleagues, the informative campaign with which they intend to let residents know how they can vote in the upcoming municipal elections to celebrate the 26th of May.

“The vote of our foreign residents is very important; they make up about 40% of our population. Your opinion counts, and can mean the change we want for this city”said García León.

And the truth is that: there are many resident foreigners who want to be part of the political life of their municipalities, but they don´t know how to do it. For this reason, they have started this campaign with informative brochures in which this information can be obtained in several languages. To do this, they must follow two steps: first, be registered in the municipality in which they reside (“empadronados”); and second, sign on in the Town Hall to the Voter´s Register of foreign residents. “If they have voted previously, there should be no problem; but if they have doubts, it is important that they go to the town hall to verify that they are in that registry. They must do it before January 30, since it is the deadline to register “said the candidate.

“They can decide the future of our city; and just as they have the right not to vote that day, they also have the right to be informed about the steps to follow. Therefore, we invite the other parties that want to join this socialist initiative, and even the city council to do so institutionally, to disseminate this much needed information in a municipality as plural in nationalities as ours” .