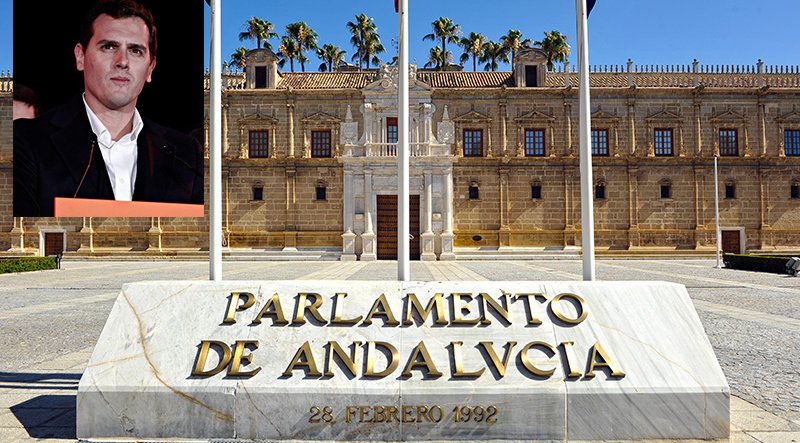 OVERTURES: Rivera (inset) said his party would talk with the PP after the vote CREDIT: Shutterstock (both)

CIUDADANOS party officials have agreed to coalition talks with the conservative Partido Popular (PP) in Andalucia and have not ruled out working with the far-right Vox, its leader has said.
Albert Rivera said the executive of his centrist party agreed yesterday (Wednesday) to try and form a “government of change” for the Junta de Andalucia following elections held on Sunday.
It comes after the left-leaning Partido Socialista (PSOE) saw its majority slashed in the vote and as Ciudadanos and Vox both made gains.
Rivera said Ciudadanos had ruled out working with PSOE which he said should become the opposition in the Andalucian Parliament after the ballot.
“I ask PSOE to assume defeat. I ask Junta President Susan Diaz not to block this because she has lost and does not have a majority,” Rivera said.
He added it would be “irresponsible” to exclude Vox from the pact. The party is controversial due to its far-right leanings and its anti-immigration stance and some critics claim it contains racist and fascist elements.
Rivera’s comments come as Manuel Valls, who is running for to be Mayor of Barcelona with the backing of Ciudadanos, said the party should not work with Vox.
“Ciudadanos is a liberal, progressive and deeply pro-European party. I am sure of the convictions of Ciudadanos, there can be no agreement with Vox,” Valls said.
Teresa Rodriguez, leader of the leftist Podemos party and head of the Adelante Andalucia leftwing umbrella group, said her party would be a “dam” against the right.
“We are not going to vote for or facilitate a Junta that includes Ciudadanos,” Rodriguez said.
Rodriguez added she had been approached by Susana Diaz to open talks for a coalition agreement, with both parties still falling short of a majority if they joined forces.
Sunday’s regional election in Andalucia left no party in a position to govern alone. PSOE, which has run the Junta since Andalucia first received autonomous status 36 years ago, now has 33 seats our of 109 compared to 47 before the poll.
The PP, the opposition party in Andalucia’s regional assembly, lost six seats and now has 26 seats.
Ciudadanos saw its numbers rise from nine to 21, while Vox won 12 seats and has entered the Junta for the first time since its founding in 2013.