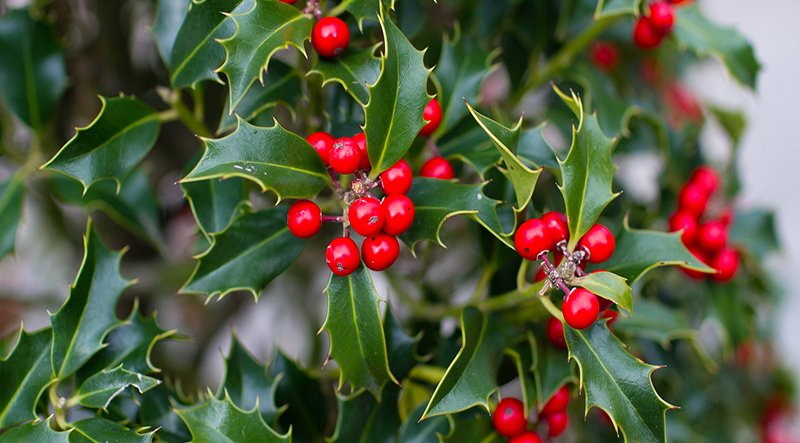 A SURE way to tell if there is going to be a harsh winter in England is by the size and number of berries on holly bushes. The bigger the crop the colder the weather will be, and no berries at all signifies a mild winter.
It’s how Mother Nature provides food for the birds during hard times, we were informed by a grizzled old timer in our Suffolk village.
Not that the birds ever went hungry in our garden; there was a hundredweight of seed and nuts distributed between the numerous bird tables and feeders. And hanging from trees, more fat balls than you would find in a Sumo Wrestler training camp.
As a Parish Councillor whose responsibilities included keeping the villages’ three greens, cemetery and parish church yard mown and strimmed in the summer, I was familiar with the location of a number of holly bushes,
But two Christmases before our departure for Spain, there was not a hint of red amongst the varnished dark green holly leaves anywhere.
The Princess was very particular about pinning a generous sprig of berried holly on the oak bressemer above our inglenook fireplace, but to keep up the tradition it looked increasingly as if a trip to the garden centre would be necessary.
But surely there must be at least one productive plant somewhere and I remembered a location that I had not yet checked.
Of course!  A large holly bush in the parish church yard.  It was such a familiar sight in the summer as I buzzed around, that I had now ignored the obvious, and sure enough there was the bush bucking the trend and displaying a festive show of bright red berries.
But then this was holy ground.
So would harvesting some of its precious crop be seen as desecration?  I didn’t think so, but others might, and just to be on the safe side I decided to return after dark.
Later that evening I went back for my prize. The Princess would be chuffed to death.
As I reached the bush there was an audible hum, and a blazing light came on over the church door. Something else I had forgotten.  It was the motion activated security light.
I froze in tableau – the Deputy Chairman of the Parish Council – illicit secateurs poised, and waited for a reaction from the large house opposite and the terrace of tied cottages that overlooked the churchyard. But not a curtain fluttered.
I quickly amputated a rather splendid branch, and greatly relieved, hurried home.
That was some years ago and it is only recently that I have begun to feel comfortable during a thunder storm and safe from the possibility of being incinerated by a lightning bolt.