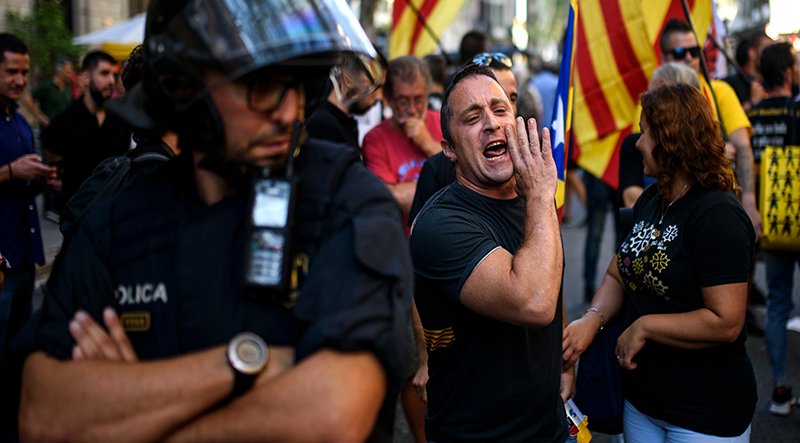 Job description
THE Mossos de Esquadra, Cataluña’s police force charged against CDR demonstrators on Constitution Day.
Everybody else had a day off and was revving up for Christmas but the Committees for the Defence of the Republic were out doing their defence job.
So Cataluña’s Mossos did their job, too, and broke up the demonstrations. Cataluña’s regional president Quim Torra decided they had violated the CDR members’ democratic right to demonstrate and ordered purges amongst the highest-ranking Mossos officers.
Meanwhile the CDR continued demonstrating whereupon the Madrid government called Torra to order.
Unless the Mossos can guarantee public safety, Pedro Sanchez will send in reinforcements from the Policia Nacional, he warned.
Sanchez is just doing his job too, so it would uncharitable and cynical to link this to the results of the Andalucia elections and the perception that the government’s conciliatory stance lost the PSOE too many votes.
Ignoring the elephant
EVERYBODY is pussyfooting around the main reason for Vox’s success in Andalucia.
The PSOE government’s handling of the Cataluña crisis is supposed to be a principal reason and it’s likely that the people who vote for Vox are probably Spanish nationalists.
The real problem isn’t even immigration. It’s immigrants.
Not the Latin Americans who share a language and, however loosely, Spanish culture. Not the expats who love the climate and the Spanish, however little they understand of what goes on in Spain.
Vox voters – and others – fear a large swathe of immigrants who left their homelands for better lives in Spain but bring alien concepts with them.
The solution is not Vox’s “Spain for the Spanish” but until a better one comes along, that’s what they’re buying.
Health warning
CATALAN-BORN Manuel Valls, the former French prime minister, will run for Barcelona mayor in next year’s municipal elections.
There’s a fair chance that he could win but there was a warning embedded Valls’ reference to the cordon sanitaire devised by the French to keep out Le Pen and the populists.
This, the former French prime minister said, should apply in Andalucia, but will Ciudadanos and the Partido Popular take heed?
Or will they let their ambitions get the better of them by courting Vox whose 12 seats in Andalucia’s regional parliament are necessary if they are to form a government?
Cs should think twice, because although Valls is running as an independent it’s under the aegis of Rivera’s party.  And come May 2019, will he want even a tenuous association with a party that makes concessions to another that opposes practically everything it apparently believed in until now?
Borderline
WHEN Quim Torra talks about for a Slovenia-type solution – with 74 deaths – for Cataluña, he could ponder on May and the Northern Ireland backstop.
If the unthinkable happened and a Slovenia solution were forced on the 50 per cent of Catalans who do not want independence, how would Quim Torra, Carles Puigdement, the CDR, Omnium, the ANC and diehard separatists negotiate their border with Spain?
Brexit would have nothing on it.