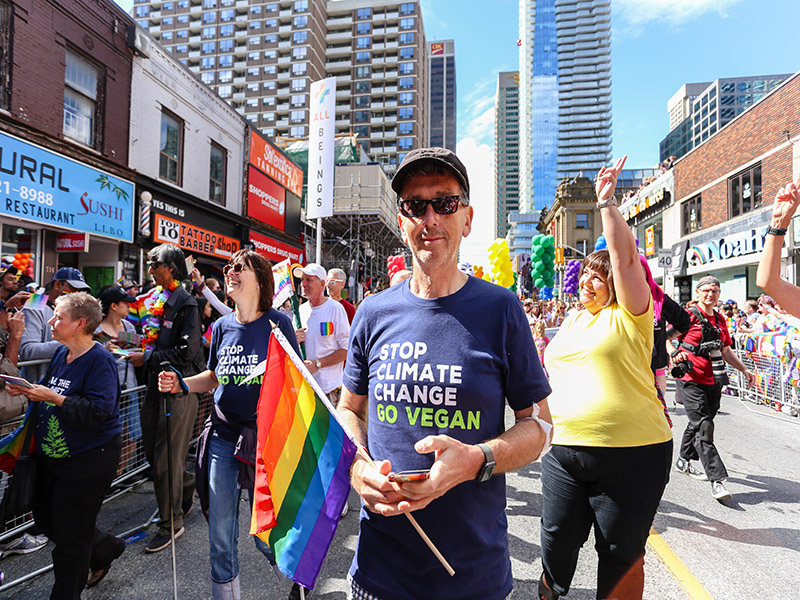 WHEN I was living in London, a neighbour asked me the daftest question I’d ever heard: “What do gay people eat?”

As soon as Hilary’s words came out her mouth, and she saw my eyebrows escalate to a hairline I no longer have, she realised how stupid they sounded. In a fluster she explained that what she meant to find out was whether homosexuals were more inclined to veganism or vegetarianism than heterosexuals.

I didn’t have an answer to that question, but afterwards I did some research and discovered that a greater percentage of the LGBT community appeared more inclined to embrace veganism or vegetarianism than their ‘straight’ counterparts.

The memory of that conversation surfaced last week when I was listening to a London radio station, LBC, where a heated phone-in was raging over what the presenter called “vegan terrorism”. The discussion arose out of various reports that butchers in France, and turkey farmers in the UK were being targeted by vegans or vegetarians. Some reported receiving death threats from these fanatics.

While some who phoned in were supportive of these tactics, most deplored them, and rightly so. We simply cannot allow zealots to dictate what we can and cannot eat.

Is there a gay element among this growing band of food fascists? I really have no idea, but a piece published last year in Diva magazine declared that compassion is a well-known trait among LGBT folk, and that the vegans and vegetarians among them simply choose to eschew animal products. Compassionate people don’t go on rampages and issue death threats, so I’m inclined to believe that, if gays were among the “terrorists” that made headlines, they would have been in a tiny minority.

But the Diva piece, written by Josie Le Vay, left no doubt that veganism and vegetarianism is growing dramatically in LGBT communities.

Le Vay wrote: “Gay vegans are everywhere. It’s actually got to the point where I presume gay people I meet are vegan … I’ve seen multiple vegan cafes with Pride flags  … Most of the girls I’ve dated have been vegan or at least veggie.

“If we look at our beloved LGBT+ celebs, you’ll be surprised (or completely unsurprised) to know that many are in fact vegan themselves. Ellen Page, Jane Lynch, Simon Amstell, oh, and the mother of all gays, Ellen Degeneres.”

She then conducted a Facebook poll that indicated that 66.4 per cent of vegans or vegetarians were gay.

I am not one of them. But as a lifelong carnivore I do, wherever possible, make sure that the meat I eat is ethically sourced and humanely slaughtered. For this reason I flatly refuse to eat animals that are cruelly killed according to religious rites: kosher or halal.

So opposed was I to such ritual killings that, 10 years ago, I gave up my favourite dining out habit: eating in curry houses. I did so because virtually all of them displayed halal notices. Instead I began preparing my own curries, and continue to do so to this day. And, without meaning to boast, I can say that are every bit as good, if not better, than any I ate in a restaurant.