JULEN’S FAREWELL: Hundreds gather in Malaga to say a final goodbye to the toddler 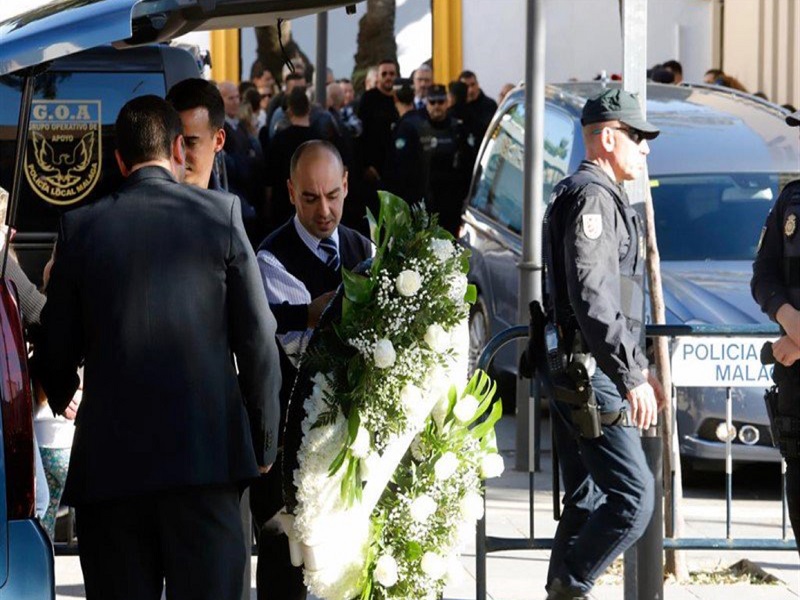 THIS afternoon, hundreds of people stood at the Nuestra Señora del Rosario square, outside the doors where Julen’s funeral services took place, to say a last goodbye to the child.

The two-year-old’s body, found yesterday at 1:25am (Saturday), was buried today at the San Juan cemetery, in the small Malaga neighbourhood of El Palo, located near to where Julen lived.

Thirty garlands and numerous bouquets of flowers were sent from supporters, including the Malaga and Totalan town hall, Provincial Government, the brotherhoods of Carmen from El Palo and the Pedregalejo. Other tributes also came in from other cities, including Salamanca, as well as the Asturian miners who participated in the final stages of Julen’s rescue.

The toddler’s family, along with a group of psychologists, walked through a passage cleared by the Civil Protection towards the entrance to the room where a white coffin with Julen’s remains was placed.

The family paid their final respects to the boy in a private ceremony, after which Julen’s parents, Jose Rosello and Victoria Garcia, accompanied by other relatives, friends, neighbours and authority officials, transported the child’s coffin from inside the funeral building to an outside cemetery.

Julen was buried in the burial plot located next to his brother Oliver, Jose and Victoria’s older son who passed away in 2017 from a heart defect.

Two flower garlands were placed at Julen’s grave, one from the child’s parents and the other from the Asturian miners; a symbol expressly requested by the parents.

The mayors of Malaga and Totalan, Francisco de la Torre and Miguel Angel Escaño, the District Councilor, Carlos Conde, the Senator, Joaquin Ramirez, the director of Parcemasa, Federico Souviron and the of the Provincial Fire Consortium, Francisco Delgado Bonilla, all supported Julen’s family members during the funeral.

Authorities have spoken of their gratitude to the team of psychologists’ who offered support during the entire rescue period and the days after.

According to initial information from the autopsy, the child suffered multiple traumas and injuries compatible with the circumstances surrounding the fall.

The position of Julen’s body suggested he free-fell by up to 71 metres before hitting a dirt floor.

The autopsy reportedly determined the two-year-old fell feet-first into the well with his arms raised upwards.

Experts believe Julen died just hours after his fall into the well.

Since the discovery of Julen’s body, the well has been covered with a 600 kilogram iron plate as a temporary solution before authorities fill and seal the hole.

Investigations have ‘restarted’ after Julen’s body was found to determine the circumstances surrounding the child’s fall.

JULEN DELAY: Could be another two hours until rescuers reach the toddler