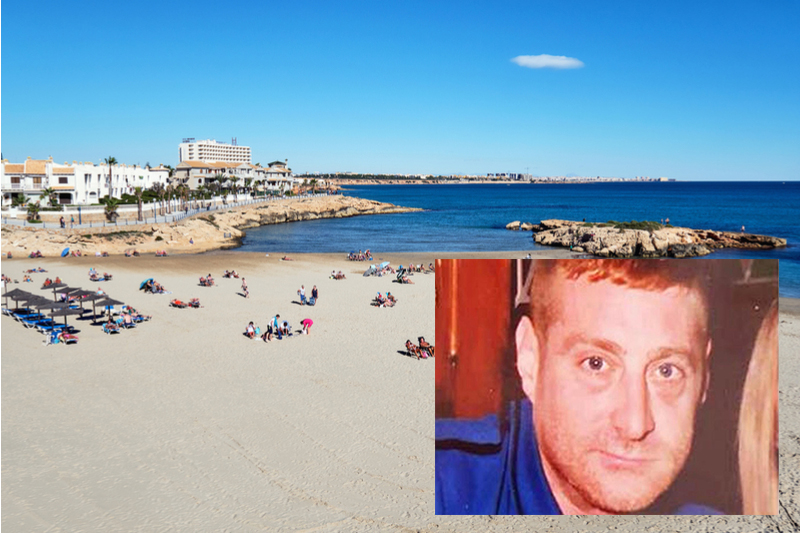 CARL CARR: According to the police the case is being treated as a murder crime. Photo: Shutterstock and @NICLA_Casas

THE body of Irishman Carl Carr, who went missing after a night out in Cabo Roig last September, has been found buried by the AP-7 motorway between Benijófar and Algorfa.

Four people thought to be involved in Carl’s death – an Irishman accused of the crime; a Spanish man accused of burying the body; an Englishwoman, the murder suspect’s girlfriend and an Irishwoman – all stood before judges in a closed-door court appearance on Saturday in Torrevieja and have been remanded in custody since.

A fifth person also appeared in court after the police questioned her, although she has been released but is still being investigated.

Spanish newspaper Información reported that according to the police the case is being treated as a murder crime, and that the various detainees have been accused of a number of crimes including homicide, the possession of illegal weapons, extortion, drugs trafficking and covering up a crime.

Some reports are also describing Carl as a “drugs baron” after he was jailed for eight years in 2008 after a drug bust in Ireland and speculate that his death involves a fallout with Irish drugs gangs.

Carl’s devasted mum, Marie, who lives in Dublin, disputes this and is demanding answers.

“Carl’s been described as a drugs baron when nothing could be further from the truth.

“He was arrested in Ireland simply because he was in the wrong place at the wrong time.

“He was told to pick up a locked bag he had no idea contained drugs. He only did it because he had just come back from Australia and had no money and he was getting paid.”

Marie is also furious that no one in Spain, not even the police, informed her of the grim discovery of her son’s body.

She said: “I found out from a paper about my son. I woke up this morning to find out that, that’s crazy.

“Nobody told me. I want to say that they shouldn’t have printed that without me knowing.

“I’ve been on to the Irish embassy to find out about this, and nobody told me, no Spanish police, nobody.”

Marie also believes that whoever murdered Carl knew about his past and made out that his disappearance and death were related to drugs.

She said that when she did finally speak to police in Spain, they told her that Carl’s death had nothing to do with any illegal substances and their trafficking.

“The Spanish police have told me his death has nothing to do with drugs. I believe he was killed because of a romantic triangle, by a man he knew who accused him of dating his girlfriend. I suspect those who did this to Carl knew about his past and tried to make it seem as if it was something to do with drugs when it wasn’t,” she told The Sun newspaper.

At the time of Carl’s disappearance, Danielle Coupe, Carl’s girlfriend of three years, launched numerous appeals for help to find him, which were shared thousands of time on Facebook.

Carl was last seen at a dance music event held in Cabo Roig on September 15. He stayed at the event until it finished at 7am and was then reported to have been seen walking over the bridge towards the medical centre on the other side of the N-332. Sources have revealed that Carl did, in fact, return home, where he continued to party with the man arrested for his murder.

Later that day, Carl then went to another nightclub where he was seen with the murder suspect’s girlfriend.

After Carl did not return home the next day, Danielle begged friends and people who had been at the dance event to provide any information about his whereabouts. “Has anybody seen Carl? He’s been missing since Saturday.

“Me, his family and friends are going out of our minds with worry.

Danielle is not allowed to make any official comments about the case to the media but posted on Facebook that she is relieved to finally have news about what happened to Carl: “I’m so glad we have got the answers we needed. Thank you for all your messages, I will organise a night for us all to remember Carl in the next couple of weeks. Sleep tight, baby, you can Rest in Peace now.”

Tributes to Carl were also shared on social media from all that knew him, all describing him as “a gentleman”, “a family man”, “a good pal”, and generally a caring man who always looked out for other people and helped them out.

Despite not being permitted to talk about the case, Danielle did speak to EWN and said: “I am absolutely horrified that Carl was beaten to death. I can’t believe it.”

She also commented that when Carl disappeared, her intuition told her that he was dead, but she needed to find out exactly what happened. “I’m relieved that I finally know what happened to Carl and that he can rest in peace now.

“Every day I get memories coming through on Snapchat reminding me of our three-year relationship. I am staying strong while these photos are keeping the memories of him alive. I will always love Carl, but I’m glad that I now have some closure.”

Danielle, who did not officially know that any arrests had taken place although she’d heard some rumours, has also asked if people could respect her privacy during this difficult time and stop continuously calling her mobile and sending her Facebook friend requests, of which she has received around 300 in the last week.

MISSING: Public appeal for Irish man who ‘disappeared’ in Spain a week ago