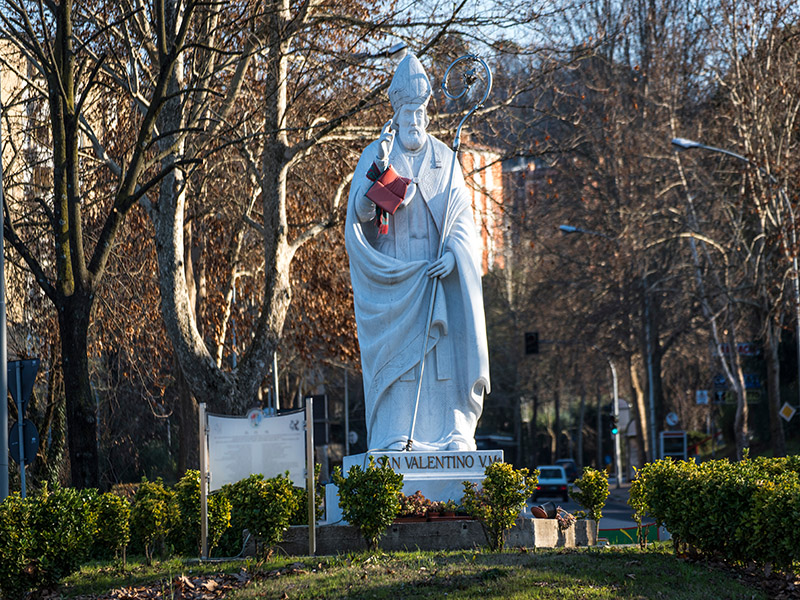 ST VALENTINE: Statue to the saint of lovers in Terni, Italy Credit: Shutterstock

PEOPLE all over the world are spending money on cards, presents and meals in honour of St Valentine without perhaps knowing anything about the Saint.

There are various legends about who was the real Valentine, but generally speaking, the Catholic Church recognises only one Valentinus, a Bishop who was martyred in the third century AD by the second Roman Emperor to be called Claudius.

Christianity was still a persecuted religion at that time although it was to become widely accepted at the beginning of the next century with the rise of the Emperor Constantine.

It is generally accepted that Valentine was a bishop in the early Christian Church who defied a law by Claudius which denied the right of marriage to young people as it was believed that single men were more likely to lay down their lives for Rome than married men.

Initially arrested by a Judge Asterius in the province of Umbria in the centre of Italy, he performed a miracle by curing the judge’s daughter of blindness which led to his release as well as all other Christians who been arrested by the judge.

Later, he was taken to Rome and Emperor Claudius called on him to reject Christ or be executed and on February 14, 269 AD he was martyred in Rome where it is believed that his remains are still kept.

A story exists that prior to his execution, he wrote to the judge’s daughter and signed it “from your Valentine” and when February 14 was designated his special day in 496 AD, the belief that he should be considered the patron saint of lovers became popular throughout the Western branch of Christianity.

Interestingly, there is no record of there being a single St Valentine’s Church in the UK, although there are plenty throughout Europe and his fame continues (at least in commercial terms) after some 1,750 years.