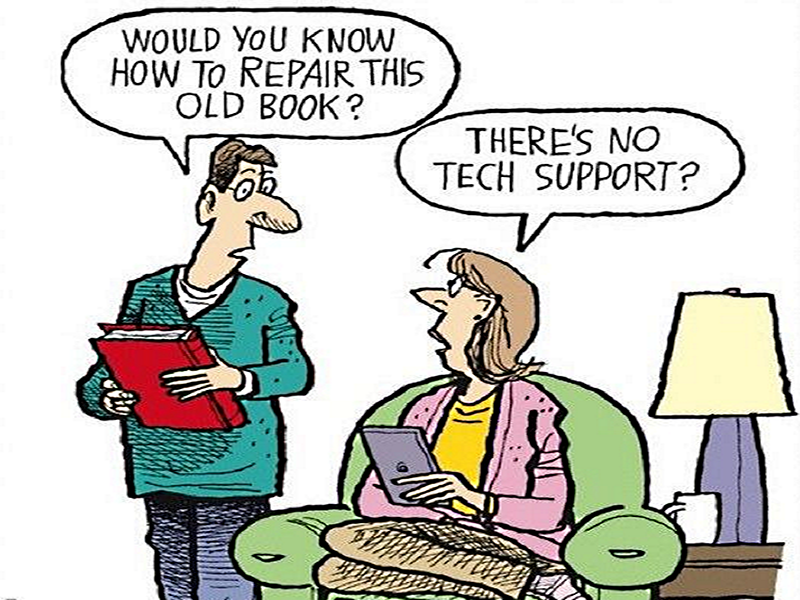 I WENT to the newsagent’s the other day to see if they still stocked Newsweek. The shop’s there, but the magazine isn’t. And never will be despite still selling thousands – it’s digital-only these days.
In the beginning were e-books and behold, Amazon founder Jeff Bezos saw they were good and begat the Kindle and it was downhill from there for books on dead trees.
And yet… Who would have thought it, but after peaking four years ago, e-books have steadily been giving back ground to their traditional counterparts. Their share drops slightly each year, from making up 20 per cent of all book sales at their peak in 2015.
Let’s look at the technology of The Book as it fights its way back.
The Book is innovative to an extreme in this chips-with-everything era. No wires, no electric circuits, no batteries, nothing to be connected or switched on. It’s so easy to use, even a child can operate it. Compact and portable, it can be used anywhere.
The Book is constructed of sequentially numbered sheets of paper (recyclable), each capable of holding hundreds of bits of information. The pages are locked together with a custom‑fit device called a binder which keeps the sheets in their correct sequence.
The Book may be taken up at any time and used merely by opening it. The Book never crashes or requires rebooting, though like other display devices it can become unusable if dropped in the bath.
The browse feature lets you move instantly to any sheet, and forward or backward as you wish. Many come with an index feature, which pinpoints the exact location of any selected information for instant retrieval.
You can also make personal notes next to Book text entries with an optional programming tool, the Portable Erasable Nib Cryptic Intercommunication Language Stylus (PENCILS).
So far so attractive. But like LPs versus MP3s, at least for now, the traditional and the electronic book both seem here to stay.
I love fondling a musty book and even getting my nose right into it, but even US Customs might have trouble separating me from my cherished Kindle.
A couple of clicks on any of its hundreds, nay thousands, of titles, and the world’s great literature is mine.
So from magazines to music, like so many of today’s ‘media consumers’, my compromise is to stay traditional for the tactile look and feel, but go digital for convenience. One thing’s for certain: never again will I set out on holiday lugging that ridiculous rucksack groaning under the latest bonkbusters.
As a child I remember dear old grandpops berating my parents when they bought me a book for Christmas: ‘The lad’s already got a book!’
Now I’ve got thousands of the things.
E-readers were invented two decades ago, but it took 2007’s first Kindle to revolutionise the market.
E-books are read on an ubiquity of devices, but dedicated e-readers continue their steady sales, with one estimate saying that Amazon alone has now sold around 100 million Kindles (other brands are available….), while flogging half a billion e-books a year.
E-readers weigh less than a paperback, start at less than €100, hold several thousand books, run for a month on a charge, and some are even waterproof. Pity they don’t look great in a bookcase.