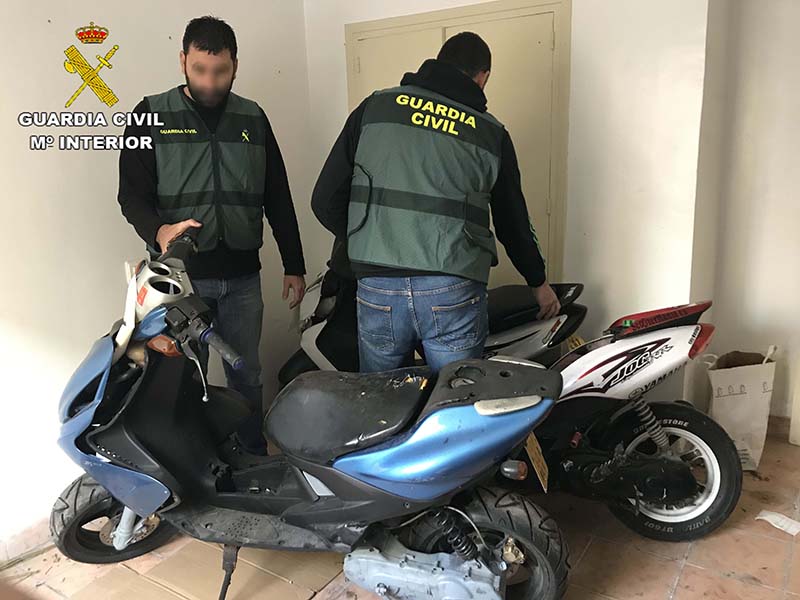 STOLEN: The operation focused on the theft of mopeds from private properties. Photo: Guardia Civil

GUARDIA Civil arrested three men in their twenties in connection with a series of crimes in Roquetas de Mar.
The launch last August of Operation Estribera II was on the back of several reports of mopeds being stolen from properties, as well as other items of value, which were then sold off privately or online.
The modus operandi appeared very similar to the activities of a criminal gang at the centre of a 2017 Guardia investigation into 60 crimes in all, which resulted in eight arrests and the seizure of a number of stolen vehicles. In the latest operation officers focused their attention on several suspects, particularly an individual identified as C.T.G., who had served time following the original Estirera investigation.
Keeping a discreet track on his movements, agents reported it looked like he was taking steps to make sure he wasn’t being followed. Officers also reported he was hiding stolen items and vehicles in his garage.
The suspect made a fairly dramatic getaway when Guardia first tried to arrest him.
Officers indicated that the car he was travelling in as a passenger should pull over, but instead the driver raced away. Officers had to dodge out the car’s way, which hit a Guardia vehicle before speeding off.
They subsequently hunted down the suspect at a property close to Roquetas port, and although he tried to escape into another property, this time he didn’t get away. Officers also arrested the driver of the speeding car and another man named as A.T.G., and were questioning a youngster believed to have collaborated on a vehicle theft.
Three stolen vehicles were recovered during the investigations.