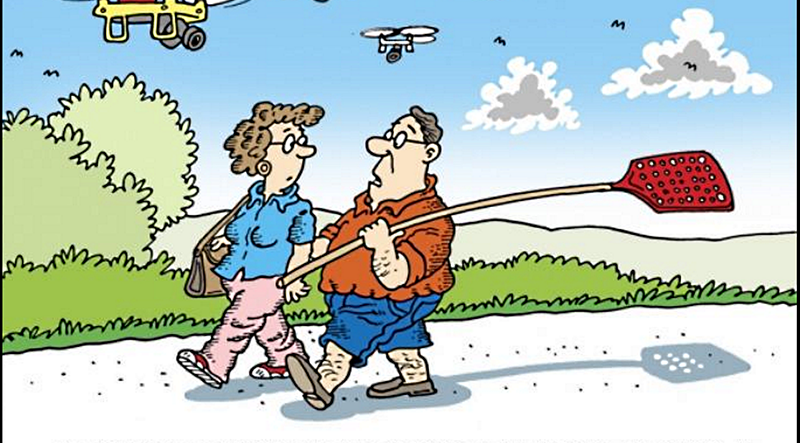 DRONE used to be what a visiting neighbour did if we weren’t quick enough to bar the doors and hide.
Now there are an estimated 1.2 million of the things in America alone (the gadgets, not the people. Although….). And Europe’s not far behind.
Name one parliamentarian who actually has hands-on experience with these increasingly ubiquitous gadgets and I’ll happily concede that the disruption inflicted on 140,000 Gatwick passengers at Christmas was just a once-off. Yeah, right.
When a typically tech-dunce US senator actually had to ask Mark Zuckerberg how Facebook made money (‘We sell ads, Senator’), it’s a pretty safe bet we’re headed for an infestation of uncontrolled drone activity long before legislators actually grasp what it’s all about.
European officials are certainly worried, but in Spain for one you still need no licence to do pretty much anything with your buzzy new toy – as long as you keep it below 120 metres, fly it no further than 500 metres away, stay 8 kilometres from airports, and keep at least 150 metres from buildings generally. Number of specific inspectors dedicated to enforcing these rules: zero.
Sales are set to double annually worldwide, and certainly many will be used for entirely legitimate purposes. David Attenborough’s magnificent Dynasties series relied heavily on drones, construction sites use them for safety, farmers inspect their land, mapping has been simplified, drones delivered 5,000 units of blood in Rwanda in 2017, and last year they’re said to have saved no fewer than 133 lives.
The photographic industry is the biggest professional purchaser, followed closely by estate agents (yes really).
By 2025 the global drone industry is predicted to be worth a breathtaking €72 billion, and Amazon is among the major retailers trialling how to drop its packages on us. Well not precisely, but you get the idea.
Yet Gatwick was a wake-up call, amid an almost universal incredulity that one malevolent hobbyist, perchance a pimply teenager in a fetid bedroom, could inflict such devastation on one of the world’s busiest travel hubs. And get away with it, as this was being written.
There have already been scores of global reports of aircraft elsewhere diverting or even suffering near-collisions with drones, a frightening thought when a €100 gadget could bring down a Boeing or an Airbus with virtual impunity.
There’s the ultimate celebrity nightmare: paparazzi with drones. Or the epidemic of drones now dropping contraband into prisons.
Right now I’m off to break it gently to my neighbour: she just wasted her money installing a two-metre fence to sunbathe au naturel.
The eagle has grounded
UNLIKE the gadgets themselves, hobbyist drone prices certainly don’t go sky-high. Indeed less than €100 gets you your own wasp-like starter drone to amaze your friends and irritate your neighbours.
A really good drone comes in at about four times that, while professional models reach a couple of grand.
A mid-range drone can capture 4K video footage with ease, but most can only stay aloft for 15 or 20 minutes before their batteries give out.
As for official anti-drone measures, such as above airports, the pioneering Dutch have now given up on what they hoped would be the world’s first really effective drone-disruptors: trained eagles. Their risk of injury on engagement was simply too high. Or perhaps it was all just too talon order….