INSIDE VIEW: Life on the streets of the Costa del Sol 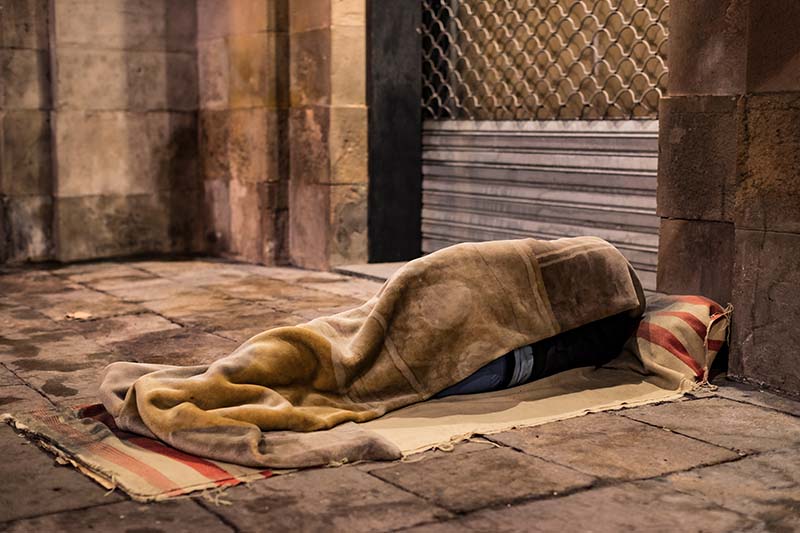 Homeless back on the streets Credit: Shutterstock

HOMELESSNESS is as visible on the streets of Costa del Sol towns as it is elsewhere in Spain, Britain and across the world.

Family breakdown, economic disaster, addiction, crime, abuse and mental health all play their part in pushing people who once enjoyed stable lives onto the streets.

Estimates on the amount of homeless people vary. Official figures place the total at 23,000, while Spain’s RAIS Foundation estimates there could be as many as 31,000 people without a home.

Some are fortunate to get support from volunteers in the wider community, like those who work at Lux Mundi.

Lux Mundi is a Christian group that offers to help those in need in Fuengirola and Torre del Mar. The organisation is celebrating its 50th anniversary this year.

They give hot food, blankets and clothes and offer a space to socialise and get help.

Euro Weekly News spoke to volunteers from the charity to find out about their work and their views on homelessness.

Pauline, a co-ordinator in Fuengirola, said helping the homeless was privilege.

“The reason I do this job is because I was a refugee from Rhodesia (now Zimbabwe). If things didn’t work out I would have been on the streets,” she said.

Pauline said the profile of homeless people was varied and often surprising.

“Sometimes we get people in who have experienced domestic abuse. Another time a very well spoken man came in who’d had a job and a flat.

“But his room was taken away and now he works part time and comes and eats with us,” Pauline said.

Pauline said homelessness in general appeared to getting worse but added there were more people willing to help.

“We have lots of quality volunteers here at Lux Mundi. But we’re always looking for more. Volunteers have the chance to help others and to socialise and get to know other people,” Pauline said.

Clare Bolland has previously been helped by Lux Mundi. The 40-year-old said she had been on streets since her husband left her and took all their money after they moved to Nerja three years ago.

“I went from coming to sunny Spain to being on the streets,” Clare said.

“I was in Fuengirola for a while but I had to leave because I was attacked. I used to sleep outside Supersol and I once saw one homeless man stab another. The police didn’t want to know, they weren’t interested,” she said.

Clare travelled from Fuengirola to Torre del Mar with her dog and a buggy filled with belongings. The journey took two days.

“I know homeless people in Fuengirola who are very nice. But there are aggressive people who come and talk about fights, you have to try and stay away from them,” she said.

Clare said there were no safe places to sleep and that she always had to be careful.

“I have to sleep with my blanket over my face so that people don’t know I’m a woman. Everyone carries a knife with them for protection.

“When I wake up every day I thank God that I’m alive,” she said.

Pauline Hulme, a retiree who lives in Torrenueva near La Cala de Mijas, has volunteered at Lux Mundi for about five years.

“A lot more people have become involved since then,” she said.

Pauline added she was shocked when she saw how diverse the backgrounds of homeless people were.

“They have a great deal of respect. They are not what many people expect,” Pauline said.

“Some who come in had a dream of living in the sunshine. But then they spend all their money or they lose their job and before they know it they’re on the streets.

“A minority chose that way of life. The way they live is hard and once they get into its hard to get out,” Pauline said.

“They carry their whole world in a carrier bag. Sometimes you just want to hug them,” she added.

Pauline said some who came to Lux Mundi were addicts. But she added it was important to understand their backgrounds.

“You can’t blame them because there are many in society who shun them,” she said.

Pauline added she had not seen any violence at the centre but added homeless people were quick to step in and stick up for staff if there was any trouble.

Pauline is part of a team that cooked Christmas dinners for the homeless for the fifth time last year. Her and other volunteers also sang carols for those on the streets.

“If you show them love and kindness it really helps. They need that feeling of self worth,” she said.

She added there seemed to be a lot of solidarity in the homeless community but the problem itself was getting worse.

“A lot of it is down to the cost of housing and rent going up. By the time they pay their rent they haven’t got anything left,” Pauline said.