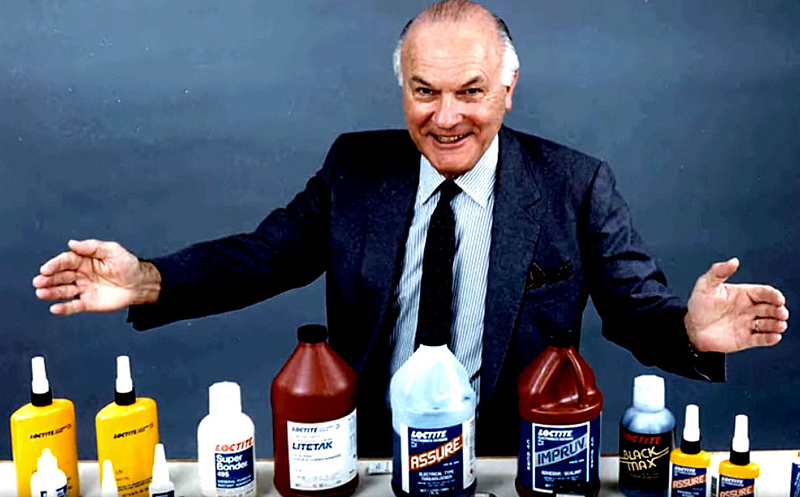 SUPERGLUE: Harry Coover was awarded the National Medal of Technology and Inovation

IT was a small repair job that I’d been promising myself for months to do, but never got round to it. The square plastic surround of a light switch in our apartment developed a crack, and all it needed was a dab of superglue to mend it.

Finally, last week I decided to take a minute off to do the repair. That’s when disaster struck. I spilled the contents of a tiny bottle all over my hands, and reflexively clenched them into fists. Panic set in immediately when I realised that my fingers had become firmly stuck to my palms. Dumb, dumb, dumb!

It took all my strength to prise them loose, and it was agony. Then, to my horror, I saw that both hands and two rings – one my white gold wedding band – were smothered in a white residue. Worse, my fingers would only half-extend because the glue in the joints had firmly set.

When soap and scalding hot water failed to remove the stuff, I tried everything from WD40 lubricating oil to oven cleaner to get it off. Nothing worked. So I turned to the Internet in search of a solution to my predicament. Apparently the only product that will remove superglue is acetone (acetona in Spanish), which is used as a nail polish remover.

As neither my husband nor I use nail polish, there was none in the apartment. So with gritted teeth I began scrubbing my hands with a metal pot scourer until they started to bleed.

The following day, for under €2, I got the acetone. It did worked a treat and even restored my rings to the shininess they had when I first got them.

Later, to my intense annoyance, I discovered on another site that I didn’t actually need acetone. Mayonnaise, apparently, does the job just as well, and there’s never a shortage of the stuff in our fridge.

I learned this when, after the glue boo-boo, I Googled ‘Superglue accidents’ – and could hardly believe how many instances have been recorded of people doing awful things, either accidentally or on purpose, with the substance.

One person, on a site called Superglue Accidents’, wrote ‘Our three-year-old daughter glued our pet cat’s paws to the carpet so that he would stay! Thank goodness it simply took a few snips of the scissors to free Smokey.’

Medical sites report that the worst accidents occur when people get superglue in their eyes while attempting to open a tube, but there other sites that actually offer ideas of how to use the substance to perform pranks such as putting the substance on toilet seats and door knobs.

There are even sites that suggest using superglue as a revenge weapon. Suggestions range from gluing a person’s butt cheeks together when they are asleep to pasting a computer mouse or mobile phone to a desk

Factoid: Superglue was first marketed by in 1958 a few years after it was invented by an American called Harry Wesley Coover Jr who worked for the Eastman Kodak company. In 2010 he was awarded the National Medal of Technology and Innovation by the President Barack Obama. He tenaciously stuck to life until 2011, when he died aged 94.