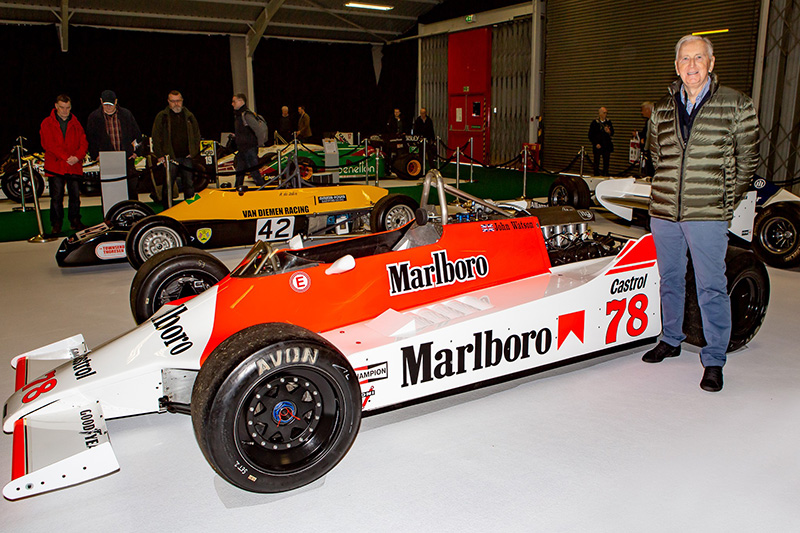 WE are very fortunate in Europe that, through the ‘off’ or winter season we have plenty of show, exhibitions and other events to celebrate this wonderful world of classic, historic and even modern cars.

One of the best, in fact the No.1 in Europe, is the International Historic Motorsport Show, otherwise known as ‘Race-Retro’ held at Stoneleigh in Warwickshire every year at about this time. The show celebrates the very best of Historic Motosport, covering an amazing range of disciplines of the Sport and combining this with Car club stands, trade stands, a ‘Live’ Stage with stars of the past, motor sport legends in fact, talking with stars of the present and sharing their experiences.  Such people as F1 pilot John Watson sat with the CCCA’s famous racing driver legend, John Fitzpatrick and rallying’s Monte Carlo winner, Rauno Aaltonen.

A tribute to the UK’s first F1 World Champion, Mike Hawthorn in 1958, took place alongside a showcase of F1’s Turbo era, the legacy of Le Mans, and 100 years of Bentley which were all popular with the thousands of visitors.

Held in unusually warm, winter sunshine, an exhilarating live Special Stage took place on the Saturday and Sunday and, for only £10, visitors could get a ride in a real rally car and do a couple of laps of the special stage.  Not only that but second, competitive special-stage was set up for some of the serious guys and a host of international drivers and cars took part.  120 plus ex works and WRC, Group 4 and Group B cars took part in this fabulous show.  The CCCA’s own Mike Anderson put on an excellent demonstration in his Group A Ford Sierra Cosworth to the delight of the huge crowd.

Rauno Aaltonen was the first across the start line after being reunited with the original Mini he drove to victory in the Monte Carlo Rally, with owner Patrick Walker acting as co-driver. A poignant sight was Jimmy McRae lined-up alongside him in his late son Colin’s Subaru.

The stage was barely a couple of hundred meters from the main halls and was a huge success.

Silverstone Auctions were in attendance with some gorgeous classic cars and also a stunning array of classic and historic competition cars which went under the hammer on the Saturday, along with much motoring memorabilia and classic watches.

For those new to Classic cars, HERO (The Historic Endurance Rallying Organisation) were on hand outside the main entrance to the four exhibiting halls to allow people to drive any of a marvellous selection of classic cars and maybe whet some motoring appetites!

Stoneleigh Showground has proved itself to be an excellent venue for this super event which, this year, ran for three days from Friday to Sunday, and there is even a decent hotel on site which is but a two-minute walk from the action.  This writer stayed for the full three days and was kept busy and enthralled for the duration.  Don’t miss it next year!

The CCCA is, as always, busy and has it’s March classic car run starting from Venta El Trapiche near Velez-Malaga on Saturday.  Any enthusiasts that would like to come along to the start can do so, first cars are due to depart at 11.00AM.  The event will finish with a lunch at Restaurante El Cortijo just outside Frigiliana.Not content with running the event on Saturday, Drive Andalucia, the Club’s specialist longer Tours arm, is organising it’s four-day Tour Primavera which will have finished yesterday (Wednesday) after wizzing around the Alpujarras and the Sierra Nevadas!  We’ll report on this event in our next issue.

The JEC has also been busy running a one-day Tour for Jaguar enthusiasts as well as owners.

This is what their Chairman, Philip Wray, reported on their recent run:

‘’We enjoyed another great run from Venta El Tunel northwards towards Casabermeja, following the ridge and being able to see the countryside for miles to the east and west, with the pale mountains visible like a Japanese painting. Even getting from the motorway to El Tunel is a pleasure with a windy Eucalyptus tree-lined road passing over two dams across the gorges of the Agujero reservoir. From Casabermeja we followed the road to Riogordo and Benamargosa, stopping for a coffee break at Venta El Trapiche, near Velez.

From here we passed Benamocarra and El Borge to enjoy more stunning scenery towards Cutar and Benamargosa to climb the steep hill (with a Cava stop) to Comares. Comares is one of the ‘Pueblo Blancos’ perched on the top of a mountain giving commanding views over the countryside. After parking, we walked a couple of hundred metres to the Hotel de los Abuelos, (hotel of the grandfathers), which is an old converted olive mill complete with all the original, working equipment! The view from the terrace overlooking the precipice is not for the faint hearted. Jose and Angel provided a most enjoyable four course lunch with wines which kept us there until 6pm. All in all, another fabulous day.’’

That’s it from me, until the next time!