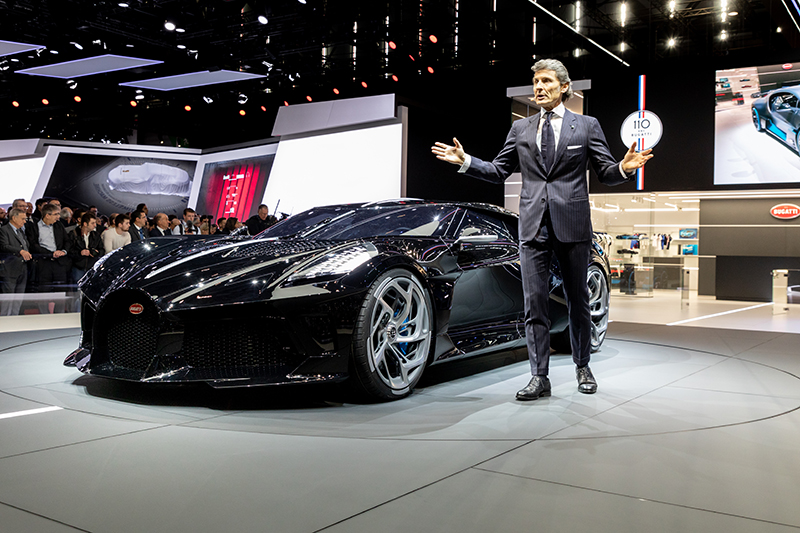 A WELL-KEPT secret until the big reveal at the Geneva Motor show last week, “La Voiture Noire” described as an homage to the Brand’s legendary Bugatti Type 57 SC Atlantic the one-off GT has already been sold and is the world’s most expensive new car at a cool €11 million (before tax!)

In the automotive world “La Voiture Noire” has a special significance Ettore Bugatti’s son Jean developed and drove one of the only 4 Type 57 SC Atlantic coupes produced. He christened his Atlantic “La Voiture Noire” the black car. The car itself disappeared mysteriously during the Second world war, if rediscovered the car would be worth a fortune.

“for Bugatti, La Voiture Noire is more than a just a reminiscence of the Atlantic. We are paying tribute to a long tradition, to France and to the creative work of Jean Bugatti”, says Stephan Winkelmann, “at the same time we are transferring extraordinary technology, aesthetics and extreme luxury to a new age.”

The hyper sports car was hand crafted for a Bugatti enthusiast. “La Voiture Noire is a collection of superlatives,” says Stephan Winkelmann. “Apart from design, quality and materials, the 16-cylinder engine with a displacement of 8 litres produces 1,103 kW / 1,500PS. A car collector purchased this unique vehicle for 11 million euros net, making it the world’s most expensive new car and continuing the long tradition of Bugatti. Since the company was first established in 1909, the French luxury brand has produced the world’s best and most powerful sports and luxury cars, true to Ettore Bugatti’s motto: “If its comparable it’s no longer Bugatti”

“La Voiture Noire is a far more than a modern interpretation of Jean Bugatti’s Type 57 SC Atlantic. It is a feast of aesthetics,” says Stephan Winkelmann.

With its extended front end and the distinctive Bugatti C-line, the “Voiture Noire“ creates an elongated impression with the elegant waistline defining the contours of the coupé. Purism and elegance are reflected in the surfaces and the clear lines. The bumpers are smoothly integrated into the body and the windscreen seems to flow seamlessly into the windows at the sides like the visor on a helmet. Without any irritating lines, the surface is “all of a piece” and there is nothing to disturb the optical flow. This means that the hyper sports car has changed its attitude and become a grand tourisme – ideal for comfortable travel on long trips.

The heart of the new creation is the iconic 16-cylinder engine – unique in the automotive world and the peak of the engineer’s art. “This is not only an engine but the heart of the vehicle and a technical masterpiece. There is no other car in the world with such an engine. It is not only extremely powerful but also beautiful to look at,” Stephan Winkelmann enthuses. The 16-cylinder engine with a displacement of 8 litres develops 1,103 kW/1,500 PS and 1,600 Newton-metres of torque. Six tailpipes at the rear bear witness to its incredible power and are also a tribute to the 16 cylinders. The new “Voiture Noire” is an exclusive, powerful and luxurious car a grand reinterpretation of an historic car. It is also an elegant and very fast way to travel!