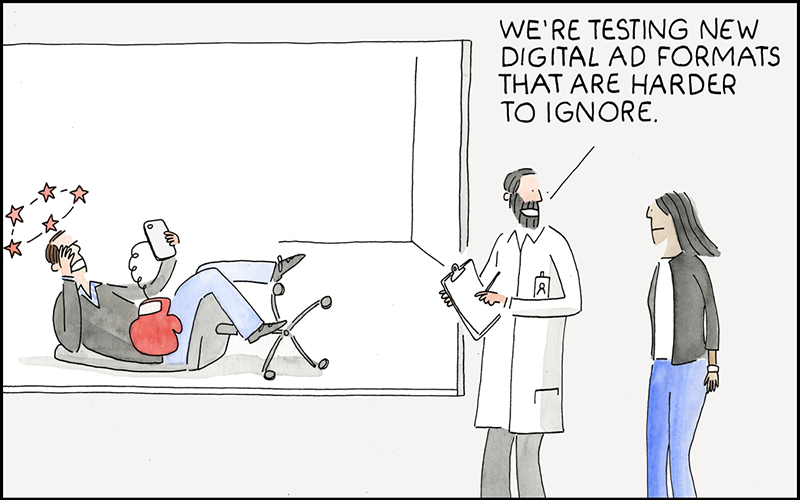 Using an ad-blocker online? You might just break the internet, warns Terence Kennedy
THE internet, like magazines, is essentially a device to get us to read advertising. Or so marketers thought until a few years ago.
Then an unforeseen thing happened: ad-blockers.
They started small on computers in the mid-90s, then grew, and grew. Exasperated by a profusion of pop-ups, flashing banner adds, superimposed videos, in-your-face messages and seriously unsubtle selling, some 30% of internet users now employ ad-blockers on their devices, rising to more than 40% among the young.
Smartphone ad-blocking has more than doubled in just four years.
Granted many online marketers brought it on themselves, pushing their ads ever harder, higher, and louder, swamping our screens until finally we cried ‘Enough!’
The people have spoken, hallelujah – but in doing so might we ultimately ‘break’ the internet we now take so much for granted? The one where we now expect content and information to be largely free for the taking?
It’s obviously not from the goodness of their hearts or social philanthropy that the corporate world spends gazillions on websites and all the gubbins it takes to get them onto our screens. They need to sell us stuff, and if they can’t, something’s got to give.
But spoiled by years of ‘free’, users are showing a stubborn reluctance to pay. Those brave souls (notably news sites) who have moved their content behind so-called ‘paywalls’ have taken a massive hit, and for many that’s just not sustainable.
Even the world’s most ad-driven techno-giant, Google, was forced to capitulate; for the past year or so its Chrome browser, the world’s most popular, has had an ad-blocker built-in, with others following suit.
Lest we think of the early ad-blocking pioneers as online knights in shining armour, their business models have not been squeaky-clean. Many pressed companies to pay them to ‘whitelist’ their sites by default, in a modern take on the venerable protection racket.
Those of thus who do ad-block either actively through an independent ad-blocker, or passively because it comes built-in with our browser, now regularly face pleas from sites we visit to ‘unblock’ their ads if we want to continue. Some folks will take the time and trouble, some won’t know how, some will simply back out and move on.
It’s hard to see this ending well without a radical rethink on both sides, and a technical arms race between advertisers and ad-blockers.
Bill Gates predicted early-on that the internet represented the future of advertising. But marketing Guru Maurice Saatchi worried that advertising could actually be killed by the internet.
Power to the people: for once it’s actually our call.
Block-it science
IF you do decide to ad-block, current browsers like Chrome or Opera enable it automatically, by default. Others like Firefox need optional add-ons.
Ad-blockers are generally free ‘extensions’ for browsers. The most popular include AdBlock Plus, AdBlock (no relation), AdBlocker Ultimate, uBlock Origin and 1Blocker.
But blocking simply everything is really not a good way to go. Blockers let you ‘whitelist’ sites you favour, usually through an icon in the browser address bar which can simply be clicked and it’s done.
In the meantime we all need to agree a middle way: a degree of advertising we can tolerate, in exchange for the internet’s wealth of free stuff.
It’s either that, or the latest industry fightback tool: ad-block killers. Followed by, what, ad-block killer killers?