EXCLUSIVE: Brit expat in Spain fears for house after landslide and road collapse 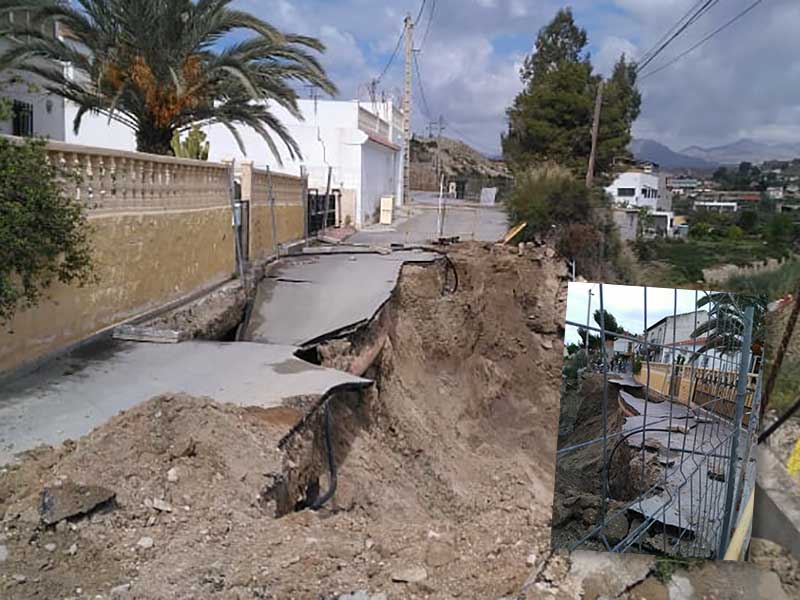 DRAMATIC: The road collapse goes right up to the exterior wall of the property. Photo credit: Colin Hodgson

A BRITISH expatriate fears his home in Spain’s Andalucia could be in danger following a landslide and the collapse of a road directly in front of the property.

Speaking exclusively to the Euro Weekly News, Colin Hodgson explained that builders had been constructing a retaining wall against the road on a neighbour’s land just across the way from his house in Calle Alfarerias, Albox.

“To me it looked like they were being a bit ambitious. Then all of a sudden there was a huge rumble and half the road disappeared”, Colin told EWN.

The road was blocked off, and the situation looked to be under control, but a week later Colin returned home after a day out to find the rest of the road had gone.

“It’s now up to the wall of my house”, a shocked Colin said.

While the road collapse has not damaged property or caused any injuries as far as Colin knows, he is very worried that the situation will get worse, commenting, “I’m expecting my wall to go next, and then after that it’s the house.”

At the very least the situation is a huge inconvenience. To walk into town Colin has to clamber over a wall and onto next-door’s garage entrance to get out. He lets neighbours with children living further along Calle Alfarerias cut across his garden and do the same to avoid the alternative: a long trip the opposite way down onto a muddy rambla.

Colin can get onto his driveway at the side of his property, but to get on his way he has to reverse down the road into a neighbour’s driveway and then drop down into the rambla.

Albox Council’s Town Planning department confirmed to the EWN that it was a private individual who had been carrying out the works which caused the landslide. The department also confirmed there was a works licence for the construction of the retention wall, and that it is the owner who is responsible for repairing the road and returning it to its original state.

Albox mayor Francisco Torrecillas has been keeping a close eye on the situation, visiting the site with the Public Works Councillor and the municipal architect and technician as soon as the council was aware of what had happened, and again since.

The mayor told EWN the repairs are underway and that the municipal architect is monitoring the situation to make sure the repairs are carried out correctly, “as is logical.”

Torrecillas maintained the owner “is doing everything possible” to put the road back to how it was, “and in the least possible time.”