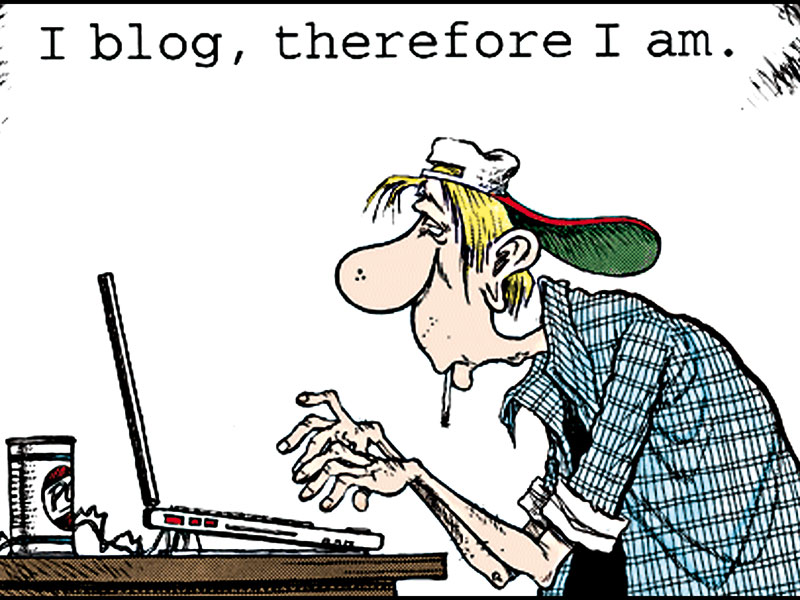 Following the money – but Terence Kennedy isn’t there (yet)…

IT used to be said you were nobody if you didn’t have your own internet site. Now you haven’t made it if you don’t have a blog.

Guilty as charged, m’lud. Though in fairness the typical blogger is considerably shorter in the tooth than this writer, has been known to back over a cliff when taking a selfie for a blogpost, and constantly posts pictures of today’s latest meal, perish the thought.

Yet here’s the 2019 revelation: there are loads of bloggers out there earning a comfy €20,000 or more for every musing they post.

How did that happen, and were we looking elsewhere when it did?

For the less tech-savvy, ‘blog’ is a contraction of ‘web-log’: a regularly updated website or web page, typically one run by an individual or small group, written in an informal or conversational style. Sort of like a newspaper column, except bloggers can earn thousands per blog while this one might just buy breakfast.

Blogging evolved in the 1990’s from postings on the early bulletin boards and forums. Written originally in the style of online diaries, the (advertising) income generated by the most popular of them can now be breathtaking.

A year or so ago the Huffington Post blog was pulling in more than €12 million a month, TechCrunch €2.5 million and poor old Perez Hilton a mere €500,000. At the bottom of the scale, Englishman Gerard Fletcher blogged regularly in mind-numbing detail about the buses on his local route. To his surprise and probably everyone else’s, his blog got 500 followers.

Even cats are in on the act. Internet star Grumpy Cat from Arizona has more than 13 million followers and was worth an estimated €88 million last time I looked. That’s a lot of Whiskas.

Strike the right chord with your blog and you could graduate to becoming an ‘influencer’ – someone whose ‘followers’ will rush out to buy virtually any product you are paid to promote.

Get 30,000 followers and agencies will pay you up to €1,000 per post to push, say, a beauty product. When TV reality star Kylie Jenner endorses cosmetics she trousers over €1 million. A week.

Which all makes those of us still plugging away doggedly in print simply wonder if, like the sweet young thing who said sex was a pain in the neck, the response is: ‘You’re doing it wrong.’

WHY wouldn’t you start your own blog? The barriers are easier than getting into print: none. All you need is a computer, free software and something to say. Though that’s optional, judging by the vacuous quality of so many blogs out there.

WordPress is by far the world’s most-used and free website creation tool, with nearly 100-million users, but Blogger and semi-social-network Tumblr are hugely popular.

All offer free ‘hosting’ (the technical infrastructure needed to get and keep your words of wisdom online), but serious bloggers will pay for their own domains.

Then just write your heart out, press Publish, and wait for the response. Or not – given that there are ‘only’ an estimated 80 million new blogs posted every month. Perhaps don’t hold your breath.