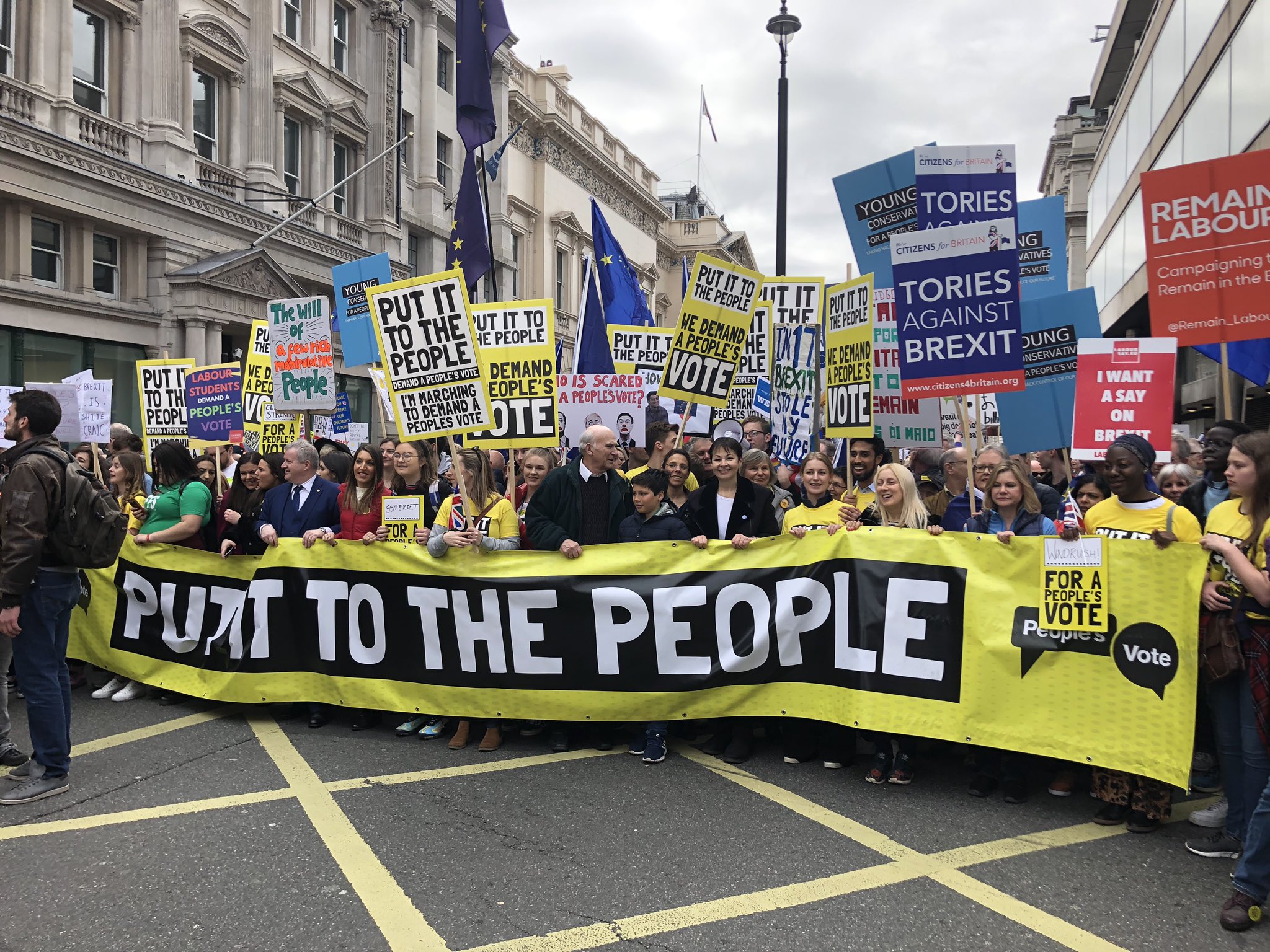 AS HUNDREDS of thousands of protesters march through London today (Saturday) for the pro-second referendum Put it to the People march, politicians, public figures and people from Britain and Spain have weighed in.

The Costa Blanca based Bremain in Spain group said on Twitter they were looking forward to being among thousands of “friends” in London. Several members of the group, which campaigns for Britain to remain in the EU, travelled from Spain to London to take part in the protest.

Also, that Friday feeling when you know that the next day you are going to surrounded by 100s of 1000s of friends! #PutitothePeopleMarch https://t.co/ObdlxgGGNP

British Prime Minister Theresa May has yet to comment on social media, but Labour leader Jeremy Corbyn said people in Britain and Europe were “exasperated” by her handling of Brexit.

In the UK and in Europe people are exasperated at Theresa May. pic.twitter.com/pDeMiatPYC

Deputy Labour leader Tom Watson broke ranks with Corbyn by agreeing to speak at the protest later today. He said he had “reluctantly” come to the view that a second referendum was the only way to break the current Brexit impasse.

Brexit is stuck in the parliamentary pipework. The impasse works for neither Leavers or Remainers. I have come to the reluctant view that the only way to resolve this is for the country to have the final say. Tomorrow I will join the #PutItToThePeople march. pic.twitter.com/78abwJzqHF

Great to kick off the #PeoplesVoteMarch just now. There is a huge turnout of people here from all walks of life, of all ages and from all over the country. We are a Remain country now with 60% wanting to stop the Brexit mess. #ExitfromBrexit #PutitToThePeople pic.twitter.com/9Osfwd1Jc0

Green Party leader Caroline Lucas, who has been an outspoken supporter of Britain remaining in the EU, said the march represented a “popular uprising”. She was pictured alongside demonstrators, some of whom carried signs saying: “Tories against Brexit” and “Remain Labour”.

We are a popular uprising.

We are the north, south, east & west.

We are the young and old.

We are the will of the people too. #PutItToThePeople #PeoplesVote pic.twitter.com/RlpQHdcdgl

Mayor of London Sadiq Khan posted a video of him standing front and centre at the march. He said: “Enough is enough- it’s time to give the British public the final say on Brexit.”

Here in London, thousands of people from across our city and country have come together with @peoplesvote_uk to send a clear message:

Enough is enough – it’s time to give the British public the final say on Brexit. #PeoplesVote 🇪🇺#PutItToThePeople 🇪🇺 pic.twitter.com/wJzXF4UB6N

Former UKIP leader Nigel Farage, who is currently leading a counter-demonstration made up of pro-Brexiteers, was pictured with supporters in a post from the Leave means Leave group.

The group said: “We believe when people speak politicians should deliver.”

Standing up for democracy on the #MarchToLeave

We believe when the people speak, politicians should deliver. pic.twitter.com/UxfmdnqdBu

MPs from the Independent Group of pro-Remain politicians who defected from Labour and the Conservatives were out campaigning for the march yesterday.

Last night @Anna_Soubry, @ChrisLeslieMP and @ChukaUmunna were out campaigning for the #PeoplesVoteMarch with @Lambeth4Europe. Thanks for the great response and we’re looking forward to Saturday! Let’s #PutItToThePeople pic.twitter.com/0C0zf4syfa

https://platform.twitter.com/widgets.js
Activist and doctor Lauren Gavaghan said “everything had changed” since the last referendum which she claimed was corrupt.

We now know the Brexit referendum was corrupt.

Key players were referred to the Met Police & fined, others are under investigation by the NCA.

Members of the public from across the country also shared what they were up to for today’s march.

Trying to catch sight of #PeoplesVoteMarch from Glasgow. Is that a @GlasgowLovesEU banner we spy? Solidarity and thanks for marching on our behalf. Stay safe #PutItToThePeople #RevokeA50 #AgainstOurWill pic.twitter.com/EgzWWDmA7K

Fair play to everyone organising and taking part in today’s #PutIttothePeople March. So much love, so much unity, sending a clear message to our government that we cannot allow them to continue the way they are. Noticeable lack of attacking the police and counter protestors too!

Readers of Euro Weekly News have also been having their say on our Facebook page about Brexit more generally.

Don Yair said following the news that the EU had agreed to delay Brexit: “At this rate we’ll probably end up staying in.”

Lynne Utting said: “Might as well just bloody give up now, we are going absolutely nowhere.”

Separately, a petition launched calling on the government to revoke Article 50 now has more than 4.3 million signatures.