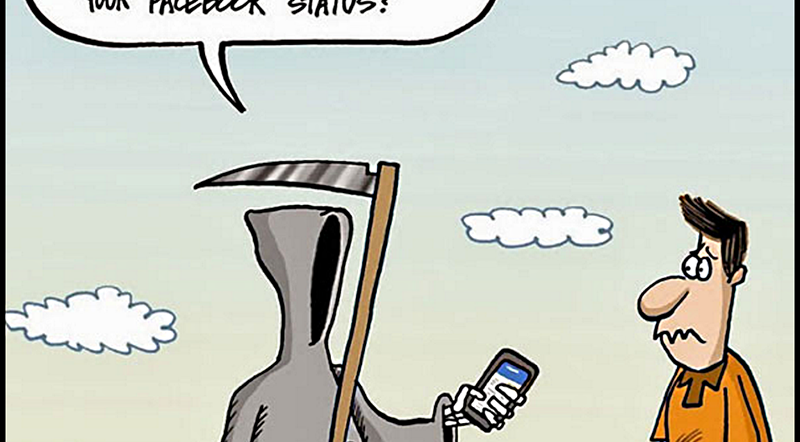 ‘Ceasing to be’ may not end our online existence, says Terence Kennedy
BY 2060 Facebook will have more dead users than live ones. Users are dying off at 10,000 a day. Their accounts aren’t.
A famous quote says millions long for immortality who don’t know what to do with themselves on a rainy Sunday afternoon. Now many of us are heading for digital immortality without quite realising it.
That’s partly because social media platforms make it difficult to either pass on, or shut down, the sites of ‘late’ users. Indeed in one infamous recent case, a site actually kept warning a deceased user that he was infringing their rules by dying without telling them. (They later apologised).
Youngsters in particular are always being warned that what goes on the internet, stays on the internet. Few realise this also extends beyond death.
In Facebook’s first ten years some 10 million users died – and in most cases, their accounts are still up there, forever, caught in a legal limbo which technophobic legislators show little appetite for tackling.
Tales abound of families denied access to a deceased loved one’s site, or all the data social media sites hold about that person.
Drawing up a will takes care of our material assets, but a few quick tips might avoid those left behind being trapped in our digital maze.
Some platforms, like Twitter and Instagram, will indeed let next-of-kin terminate an account on proof of death, but Twitter still denies access to anything on that account.
Facebook recently bowed to years of pressure by adding an option the still-living user can tick, letting the account be deleted after death. It also lets you appoint a family member as a ‘legacy contact’ who can, among other things, remove ‘inappropriate’ content from an account.
Google holds more information about more people in the world than any other platform, and it too has now made it easier for others to access and manage that information after a number of high-profile legal challenges.
What’s easiest all round is to access Google’s ‘Inactive Account Manager’ while you’re still breathing. This lets you be very specific about what’s done with your digital information after your account has been inactive for a set length of time. And, importantly, exactly what you’d like your heirs to access.
This means thinking carefully what you want them to discover once you’ve shuffled that mortal coil. That’s because Google saves absolutely everything you have ever done, from e-mail to stored photos to map routes and even your browsing history: i.e. every single website visit, including those you may have accessed for, um, anatomical research…
Pass with a password
APPOINTING a digital trustee informally is actually the simplest way to deal with your digital legacy. The good news is that it involves no official procedures; the bad is that it has no legal standing if there’s any dispute.
All you do is give the person of your choice your access details and passwords. If you use password management software, or keep all your passwords in an encrypted text file, then just give them the information and your master password. Or that giant Post-It note.
This at least lets them post news of your demise, and curate any past or future content.
Technically you are breaking the rules until notifying the platforms of your death. So let them sue the account holder – I dare them.