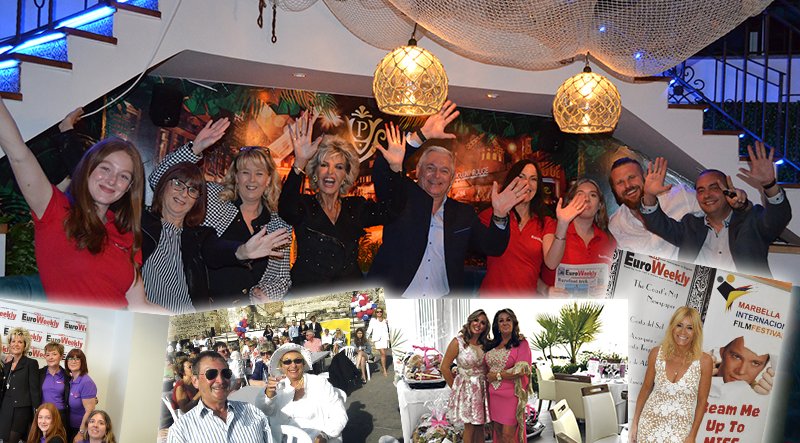 MEMORABLE: A look into some of EWN's most memorable events.

WE have had many proud moments here at the Euro Weekly News but here is a look into some of our most memorable moments over the past 20 years.

The glamour of film

Over the past 20 years we have seen many changes in Spain, and also witnessed how it has grown with the help of expats.

The country has benefited in many ways both economically and culturally. A great example of the latter is the Marbella International Film Festival (MIFF).

Set up in 2006 it has showcased the work of some of the most exciting international talent in the ‘alternative’ film world, and brought tremendous publicity to Spain.

The EWN is proud to have been closely associated with MIFF as official media partners. It has given us the opportunity to highlight the fantastic work done by the festival in encouraging worldwide talent to grow and develop.

At the heart of its success is Mac Chakaveh who is the brain behind the event who has grown MIFF from relatively small beginnings into the major festival it is today – much as the EWN has grown into being the biggest English language newspaper group in Spain.

In 2010, Fuengirola’s Sohail Castle was the site of an epic fundraiser organised in collaboration with the Euro Weekly News.

The Spring Garden Party, which saw more than 500 people show their support for Age Concern, raised more than €20,000.

Hosted by former Spectrum FM presenter, Paul Breen-Turner, the fundraiser was the first ever event of its kind to be held for Age Concern and went down in the history of the association as a great success.

The money raised went to fund training for 100 caseworkers to help the elderly and vulnerable in Spain.

Before the party was over, EWN’s Michel and Steven Euesden, were called to the stage to thank them for all they had done to support the Garden Party, and they in turn thanked everyone in the community who had got together to achieve so much to make the night one to remember.

Among the EWN’s many charitable endeavours over the past 20 years has been sponsoring the annual Positively Pink Ball in La Cala de Mijas.

As media sponsors and passionate supporters, the Euro Weekly News has been on hand to help the charity raise funds and awareness for breast screening over many years.

In October 2017, the EWN was proud to be present to witness the Positively Pink Ball’s record-breaking night, when the charity raised a record €30,500.

The event received a touch of celebrity magic in the form of guest auctioneer and Emmerdale actress Lorraine Chase, who had flown over from the UK especially to help raise funds.

The theme of the evening was a night through the decades with performances by including Janet Jaye as Tina Turner, Stelvis, the Rat Pack and Carolynn May as Shirley Bassey.

Helping to make the difference

It may be old now, but the Euro Weekly News was once young too! When it was set up it started with a core set of values which remain at its heart today.

Its founding mission was to deliver the Spanish news to the expatriate community in a non-sensationalist, easy to read and informative manner.

To be the voice of expats it needed to be very much at the heart of the community. As part of its ethos the EWN has down the years supported many events and charities, large and small, and this is something it continues to do, especially for dynamic new causes which need a helping hand.

For example, so far this year the EWN has already thrown its weight behind two major expat-organised events.

We sponsored and were media partners to the Costa Women International Women’s Day conference. This brought many of the most dynamic businesswomen from the expat community in Spain together to network with like-minded women and to learn from each other’s experiences and expertise in their own particular fields.

Then we attended the launch of the Best You Legacy Club Marbella, for whom we are again media partners. The club aims to help people leave a legacy, whether it be in the business world, charitable causes or even something more personal.

What both these events have in common is that they bring together people from all parts of the expat community who want to make a real difference -just like the EWN always has.