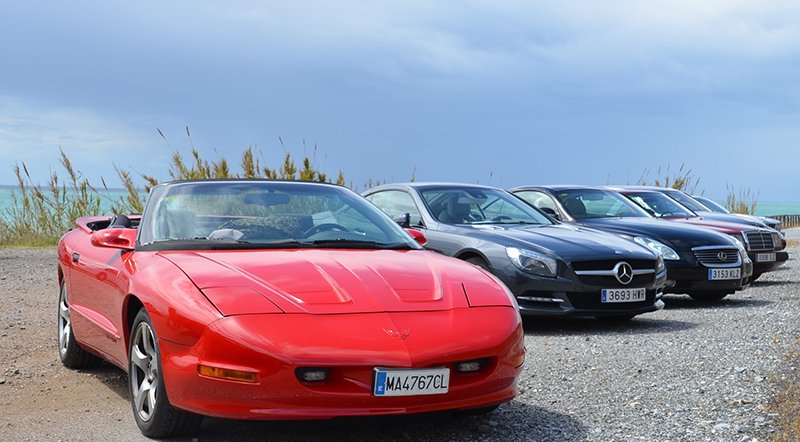 IT’S been another busy month for the Classic Car Club of Andalucia.

Starting the April events with a Clubnight and dinner at ‘Treetops’ restaurant at El Chaparral, home of the Club for the past 11 years, the Club was treated to not only a first-class dinner but an evening of entertainment, in the form of singing and dancing, from ‘A Touch of Class’ whilst at the same time raising money for local charities.

CCCA members were very generous and a tidy sum was raised.

The Saturday following that saw the Club have its regular monthly classic car run. This time organised by CCCA member and JEC Chairman Philip Wray with help from his wife, Jenny.

A super route had been organised, with the start venue at Venta Jose Carlos on the Almogia road just off the main A7 Malaga ring-road. Although the weather forecast had not been good, dampening only a few spirits, the morning dawned quite warm and sunny whilst crews enjoyed coffee and the traditional, almost mandatory, bacon ‘sarnis’ during registration.

The car park was filled with interesting machinery and enthusiastic crews ready to go as Philip prepared to give his briefing just before the appointed departure time of 11.00AM. Punctual as ever, following words of wisdom from Philip, the crews set off at a leisurely pace in the direction of Almogia, bearing right after 15 kilometres to then pass the beautiful lake and reservoir of Almogia.

Due to the threat of bad weather a few crews decided to ‘play safe’ and bring a more modern vehicle and there were two Bentley Continental GT’s on the event, one in the hands of regular CCCA members Tony and Rita Rielly who were enjoying the power and the luxury of what must be considered a ‘modern classic’.

New Swedish members, Michael and Carina Antonnsson, came along to see what it was all about in a very well preserved 1989 Mercedes 230CE as did regular CCCA crew, Simon and Andrew Buck-Honour whose similar 230CE was very pretty, finished in a dark red metallic.  Both these cars are 30 years old, earning them full classic status, although still retaining something of a ‘modern’ look.

Club members John and Marion Richardson were keen to try out their newly acquired red Pontiac Firebird, the first time one of these American muscle cars has come to the Club.

A number of Jaguars were present as quite a few CCCA members are also members of the Jaguar Enthusiasts Club, Jack Weiss had his gorgeous, bright red XKR convertible along with co-pilota Judit. Philip Wray had his very pretty XK8 Cabrio with long-suffering ( she says!) wife Jenny reading the Tulip Roadbook. Club Presidente, Ian Giles, brought two co-pilotas, wife Carol and new member Marilyn MacPherson, in a very nice 1993 Mercedes E320 Convertible that has been off the road for two years going through major restoration and rectification work.  A few minor teething problems didn’t cause much of a problem and the car drove very well indeed.  This, another car that was recently considered a ‘modern classic’ but that has now achieved full classic status due to its 26 year vintage.

It’s a long drive from Gibraltar but CCCA members are a hardy lot with members Robin and Jane Batchelor making the trip in their Porsche Boxster and thoroughly enjoying the experience!

The route made its way towards Casabermeja before turning eastwards towards Velez-Malaga and dropping through Benamargosa, Cutar and Comares. Stunning scenery and white villages to see before a coffee stop at Restaurante El Trapiche which is almost next door to the Airfield of Axarquia where many weekend flyers were seen out enjoying their light aircraft.

After coffee our intrepid crews followed a beautiful route through to Benamocarra, Iznate and passed by Cajiz before stopping down on the coast on the old N-340 for a much deserved Cava stop.  Always a terrific part of the CCCA runs, it’s a chance for people to get together again, relax by the sea and enjoy the atmosphere and the cars, before heading for a decent lunch.

This particular event finished at Lo Pepe Molina by the sea at Almayate Costa and was a most enjoyable affair. More good food than most could cope with and plentiful supplies of wine for the co-pilots.

Another super-successful CCCA day out!

The next Club events are in May, the Clubnight and dinner will be on Tuesday, May 7th and there will be a classic car run and lunch on Saturday May 11th organised for the Club by Mike Glithero and Sue Gerrard which will be based in Calahonda at Los Olivos there.

Another memorable event to come is the JEC 4th Birthday celebrations that will finish with a sumptuous lunch near Antequera. That will be on Saturday, April 27th. I will report on that one in my next Page for The Euro Weekly News.

That’s it from me until the next time!