Hell of a Party! 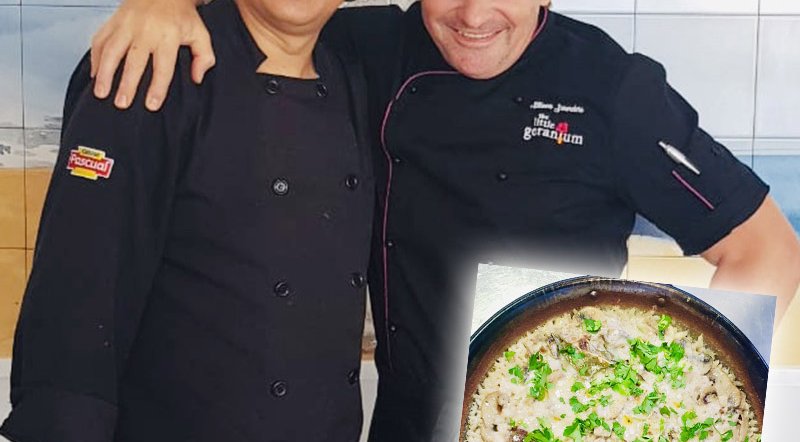 A FEW years ago I met a man called Salvador (the owner of restaurant El Torreon in La Cala and El Capricho in Calahonda) both restaurants are on the beach with sea views.

“Hell of a party!” he said (It’s his saying and he says it to everyone when he meets them) “Where?” I said.

“Would you like to be involved with El Torreon on the beach?” he asked.

Well yes but no because our Little Geranium doesn’t have a beach view and if I do my food/art with a view, then surely I will lose business I thought. But then after discussions we decided to do something that we don’t do at The Little Geranium …Brunch!

Brunch is defined as ‘a late morning meal that combines breakfast and lunch.’

If you have breakfast you are more than likely to want lunch but get up a little later and have Brunch, then you can have two in one. It makes a lot of sense and saves money!

Brunch originated in the late 19th century as a cure for a hangover on a Sunday morning and the trend took off into the United States in the 1930´s.

So I created a brunch menu for El Torreon and on it some great breakfast dishes but also something a bit different.

My wife Michele loves healthy eating so I put on a healthy dish of crushed locally grown avocados on toasted German rye bread and a paella made with mushrooms and truffles.

Paella originated in Valencia with the Moors influence and was originally intended as a peasant food of rice with bits of meat, game and inexpensive fish.

So a paella made from wild mushrooms and truffles doesn’t really fit, “but this is 2019” I said, “anything can and should fit.”

Salvador looked at me over his glasses in a disapproving Spanish heritage way and said “it’s not a paella!”

Personally I don’t think that it matters what we call it as long as the dish is amazing and it is!  Most meat eaters and veggies love wild mushrooms, throw in a little fresh truffle some parmesan and some truffle oil and you have the most divine flavours bake it in the oven like you would a paella and you certainly have something a bit different!

Salvador tried it and agreed that it was fantastic but asked if I could serve it on the main menu as he doesn’t see it as a brunch dish. I don’t mind where you serve it I said and so Salvador called it Risotto Steven Saunders style!

“No one knows what the hell that is” I said laughing out loud “but that may add to the uniqueness and mystery of this amazing dish.”

So if you are visiting El Torreon this summer ask for Steven Saunders´ risotto and if you want it as a brunch dish, just ask them. It takes a little time to prepare so be patient sit back enjoy the weather and wait for this gastronomic delight! Send me an email and let me know how it was!

Mushroom Paella in the style of Steven Saunders!

A squeeze of lemon juice

2 tbsp of mascarpone cheese to finish (or thick cream)

Heat the oven to 200°C and heat your paella pan

Bring the stock to a simmer in a pan. Heat another thick bottomed saucepan and add a tablespoon of olive oil. Stir in the rice stirring well for a minute.

Pour in the wine and let it reduce down until the pan is quite dry. Gradually add the stock stirring frequently and the garlic and the chopped onion. Let the rice absorb some of the stock in the pan

Fry the mushrooms in a frying pan, toss over a high heat for three to four minutes until they are golden brown and any moisture released has been cooked off.

Add the mushrooms to the risotto, along with the truffle pieces and a little more of the boiling stock. Stir in two thirds of the Parmesan and add the mascarpone cheese and adjust the seasoning. The mix should be wet but not like liquid.

Pour this mix into the warm paella pan and cook for approx. 20 minutes until the stock is absorbed and the rice is cooked.

Finish with a squeeze of fresh lemon on top and the remaining grated Parmesan (on top) and put back into the warm oven for 2 minutes or so, to glaze.

Finally drizzle the truffle oil all over and throw on the chopped parsley and serve in the centre of the table and help yourself!

Email any questions to: [email protected]