The Only Way is Marbs! 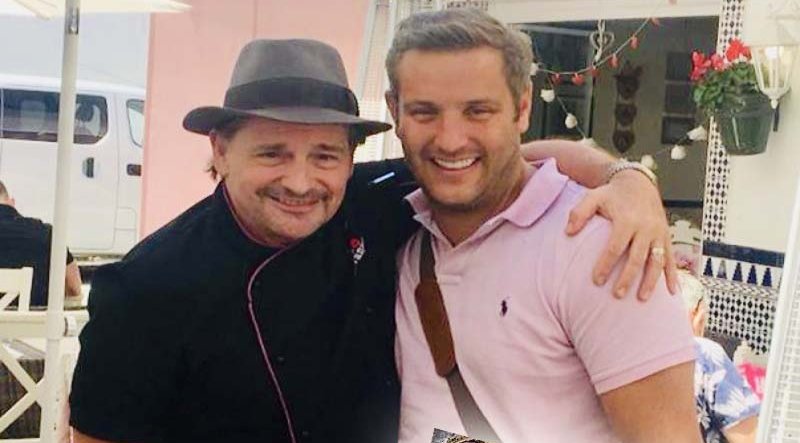 SOME time ago I met up with Mark Wright from The Only Way is Essex (TOWIE) on an EasyJet flight to Marbella.

He was single in those days and off to Ocean club for some fun and sun. He was genuinely charming to everyone and the hostesses were excited to see him and have pictures taken with him.

We sat next to each other and chatted about people we knew.

He was going to do the most amazing dining experience with live music Mark said. My heart sunk. I was thinking that I was going to be the only one in La Cala serving modern fine dining and wasn’t too keen on the competition!

So when Elliott opened Olivia’s I was nervous. A couple of years later Elliott and I started to chat more and more about business things and we became friends. By now it was clear that we were two totally different businesses.

Olivia’s serves large numbers of people that want good food, live music and entertainment.  The little Geranium is tiny and serves a handful of clients and is a very personal dining experience. (These days 90 per cent of our clients order tasting menus).

Most of my orders have eight or nine dishes on and that takes time to appreciate each dish and explain the dishes to the client and live music would be a distraction!

So as Elliott and I became mates we realised how different our two businesses were and can see that we are both needed in La Cala.

A few months ago, Elliott and Sadie had a little boy, they called him Billy. They were recently on the front page of OK magazine in a feature to celebrate Billy´s christening which Michele and I were invited to.

It was lovely to be amongst his special friends and family on this memorable and important day and we chatted with Gemma Collins and Arg, Denise Van Outen and many others from the hit TV series TOWIE.

Elliott served a buffet with cheeses, Spanish hams, tapas and my favourite …Oysters. As I grabbed an oyster he came over and joined me.

One of our favourite foods he said reminding me that whenever we have a business meeting we usually have a plate of oysters and a cocktail!

Elliott’s new concept, Eat Fish and Party is working well. I can see that by that numbers of people packing into Olivia’s.

“Cheers mate” I said raising a glass with an oyster in one hand and a glass of Champagne in the other, “here’s to a successful season and a really cute baby!”

Oysters are best eaten raw people say but those people have never usually eaten them cooked!

Oysters Rockefeller were created in 1889 at the New Orleans restaurant Antoine’s. It was developed due to a shortage of escargot substituting the locally available oysters. The recipe varies but here is our favourite.

6 fresh oysters in their shell

Preheat the grill to its highest setting.

Open the oyster shells with an oyster knife. Discard the top and loosen each oyster from the base of its shell keeping the juices. Set aside but keep cool.

Melt the butter in a small frying pan. Fry the onion, bacon and the parsley together for 2-3 minutes

Add the spinach last and cook until wilted.

Place a teaspoon of spinach and breadcrumb mixture onto each oyster sitting in the shells.

Place the oysters onto a baking tray and grill to cook until golden-brown usually 2/3 minutes. Serve immediately.

For this recipe the oysters are eaten raw but topped with a foam seconds before serving them. Open the oysters as above and serve them on crushed ice with lemon and some spicy sauce like Tabasco.

Juice of half a lemon

Simply sweat off the onion and garlic gently not to colour in the butter and oil. Add the cream and the truffle pieces and cook for about 15 minutes on a low heat. Warm the milk in a separate pan. Pass the sauce through a sieve to remove the garlic and onion and now add the milk and foam using an electric hand blender.

Using a spoon, spoon a little (foam only) onto each prepared oyster and drizzle with truffle oil as well as a light sprinkle of Maldon salt and serve.