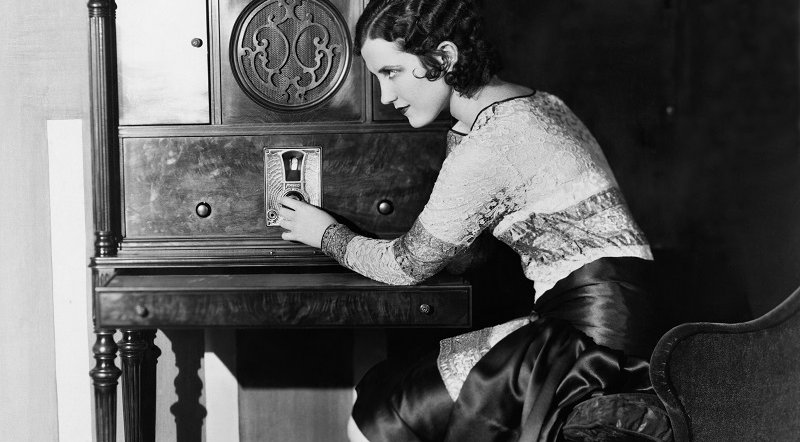 CRACKLING WIRELESS: The only way to listen to news broadcasts in the 1950s.

WE have been considering the enviable quality of life of 1950s Britain but there are, of course, a number of downsides.

The first that springs to mind is the absence of the huge technological and communication advances that offer a more comfortable and more convenient life today. In the early fifties, unless we had a telephone at home, every time we needed to contact anybody or any authority based more than a short bus ride away, it was necessary to head for the nearest telephone box. Bills were settled by writing a cheque and posting it. Houses were heated by coal fires. News was broadcast through a crackling wireless and music through breakable 78 records played on a gramophone that constantly needed winding up. As there were no computers or even pocket calculators, office workers and cashiers in shops and banks had to make the calculations in their heads or by scribbling on a pad. Bank statements issued by the banks were prepared with pen and ink. There were no credit or debit cards. There were no shopping centres, no public gyms.

Motor cars had to be started with a cranking handle. They had no heaters, no radios, no tubeless tyres and no effective suspension. Their engines had very little power and, because there were hardly any dual-carriageways and no motorways, road travel was slow. A journey from Oxford to Brighton would probably involve an overnight stop near Woking. Trains were hauled into draughty stations by smoke-belching locomotives. Air travel was rare and most people travelled to Barcelona and Naples by train, taking over 30 hours.

However, we probably derived more pleasure from simple things than from much more sophisticated things available today. These were exciting times. The first ball-point pen, the Biro, available in blue, black, red and green, was so much more practical than the fountain pen. The wooden toy vehicles succumbed to the Dinky toy range. On Saturday mornings the cinemas put on special showings for children. Comics and magazines, such as Adventure, Children’s Newspaper and Boys’ Own Paper were remarkable stimulants of the imagination. Because there was no concept of the innovations to come over the next sixty years all these new products and experiences were welcomed with enthusiasm after the privations of the war years.

Prior to the free-love culture of the sixties, the kiss was a far more intimate experience than today. In dance halls the waltz and the fox-trot offered a young man the rare opportunity to enclose a girlfriend or a woman he had never met before in his arms. In general unmarried couples did not live together. When a girl invited a boyfriend to stay at her parents’ house, they slept in separate rooms.

But we have traded a more orderly, innocent and, in many ways, a more gentle way of life for today’s world of confusion, cynicism, violence and selfishness.

Women desire male celebrities, epitomised by Cary Grant and Rock Hudson, who are well-groomed, clean-shaven, fit and handsome. The hairy, dishevelled and unhealthy are not considered attractive. Men dream of models and air hostesses with beautiful faces and shapely figures, inspired by Sophia Loren and Vivien Leigh. The coarse or rotund are of less appeal. Each year a Miss World contest is held and provides television entertainment for millions of viewers. Some protestors claim the parade reduces the parade to the level of a cattle auction, but they are in a minority. It is widely recognised that we are born with various blessings. Some of us have a developed intellect, others physical strength, a sunny disposition or sharp business acumen. Some are good at “fixing things”. Others are blessed with good looks, so why should this not be recognised and celebrated?

There is a range of daily newspapers and weekly magazines in full colour. The “quality” papers are content to leave trivia and gossip comments to the “red-tops”.

Filthy “rugby” songs abound but, while some may be blasphemous or offensive to minority groups (the disabled, homosexuals, prostitutes or certain races), they hardly ever target living individuals.

Generally, people are not over-sensitive. We are free to use words such as blackguard and black mark – and indeed blackberry or blackbird! – without any second thoughts about causing offence to people of African origin. Men are actors or conductors, women are actresses or conductresses. Fire-fighters are firemen and pupils are known as either schoolboys or schoolgirls.

Churches are well attended and the country upholds many Christian values. In most areas there is tolerance of alternative beliefs and religious practices.

Most families sit round a table together for meals. They bond over fried eggs for breakfast and home-prepared lunches and suppers. The children’s parents – mother and father – have been together since before the birth of the eldest and are likely to remain so. In a majority of cases the parents know where the children are practically all the time. When there are problems with bullying or unwanted attention, the children are likely to confide in their parents for a solution. If they misbehave at school, a caning may instil discipline. At home either parent can decide whether the offending offspring deserves a slap on the bottom or a “clip round the ear”.

Health and safety issues are sensibly appropriate for a mature society. For example, it is recommended that road workers wear face protection when using pneumatic drills to dig roads. The government may offer such guidelines but greater responsibility is invested in parents, teachers and employers.

Sadly there are no flights to this destination. This is, believe it or not, England in the nineteen-fifties.