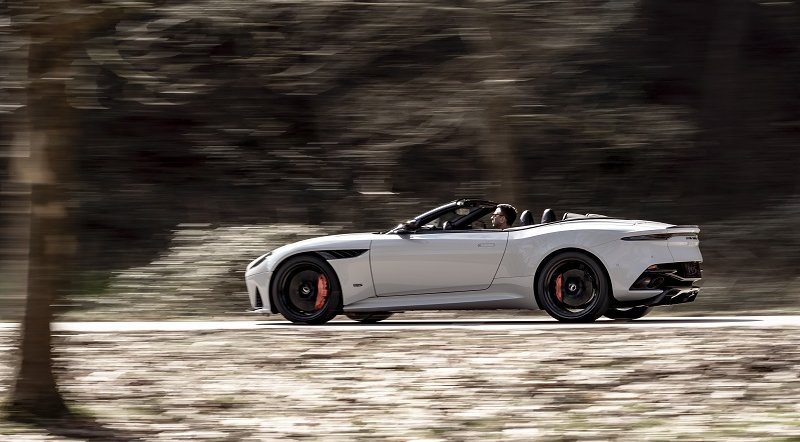 ASTON MARTIN has opened the roof on its latest open-top GT and it is a real beast.

Billed as the manufacturer’s fastest roofless car yet, it can hit 211mphwhen the 715 BHP 5.2 litre V12 engine is opened fully up.

The new DBS Superleggera Volante delivers all the performance (nearly) of the British marque’s critically-acclaimed Super GT flagship – the DBS Superleggera – and blends it with class-leading convertible technology.

With the aim to create the most beautiful flagship Volante on the market, Aston Martin says its primary mission was to retain the coupe’s powerful dynamics, aggressive poise and astonishing performance.

Mr Reichman said: “DBS Superleggera produces a spectacular and relentless level of performance and so for the Volante, we focussed on bringing that extra level of sensory overload that only an open-top Super GT can deliver inside the cabin.

With the unique dynamics, beautiful yet brutish design and the unmistakable harmonics of Aston Martin’s 5.2-litre V12 engine, we believe we have delivered a unique and unforgettable driving experience that is synonymous with the traditions of the Volante name.”

At the front, the car’s splitter and airdam work in unison, accelerating airflow underneath the front of the car to deliver true downforce and assist cooling by feeding air to the front brakes.

The new deeper side strake draws more air from the front wheel arch to reduce lift and aid high-speed stability.
Behind the front wheels, the ‘curlicue’ allows air to escape and flow smoothly along the car’s flanks, while the double diffuser at the rear allows air to exit cleanly and neutralise lift as efficiently as possible.

A revised iteration – to accommodate the Volante’s clothed roofline – of the revolutionary Aeroblade ll system continues to deliver additional downforce at the car’s rear.

Each dynamic driving mode brings its own level of noise too, feeding the level of emotional character and connection. In GT mode, the engine note simmers, but select Sport or Sport Plus and the acoustics become progressively more intense.

Conversely, when you wish to be discreet, ‘quiet start’ offers a low-key alternative to DBS Superleggera Volante’s otherwise rousing flare of revs on start-up.