Be a smartie, not a smombie 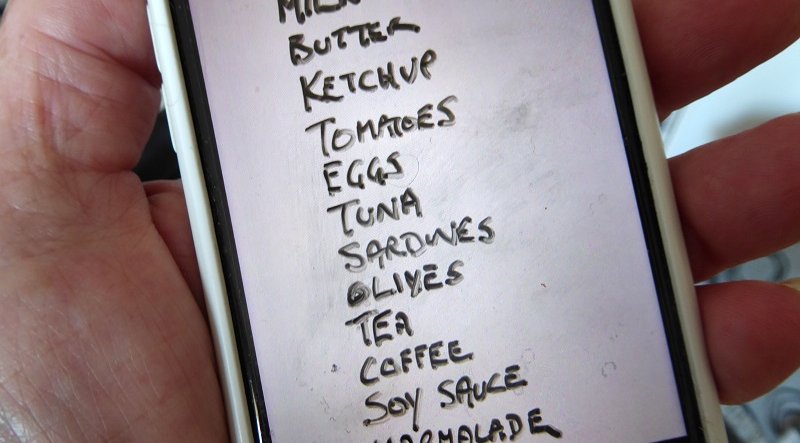 THERE’S a magnetic whiteboard attached to my fridge, and each day I add items that need replacing. Then, when I’m ready to do a supermarket run, I snap a pic of the board with my phone, and wander around Mercadona’s aisles filling my trolley with all the stuff that I need.

The method works a treat, but last week I realised that I’d forgotten to photograph the board before leaving home. This unsettled me to such a degree that I had to call my other half, Marcus, and ask him to take a shot and send it to me.

As I stood rooted to a spot close to the tuna section waiting for the list to arrive, I reflected on the days when I could instantly memorise lists of up to 100 items. This ability came after I took a memory training course a few month before my final college exams. Up until then I had the memory of a goldfish, mainly because I was a consummate daydreamer, and I found impossible to concentrate on lessons.

Then along came mobile phones, and without realising how harmful it might be, I began migrating practically everything stored in my head to my first smartphone. Within months I was practically a slave to the thing. Twelve years down the track I can now count myself among the millions worldwide who have literally lost their minds to an oblong object that, if misplaced or lost, can lead to panic attacks on a monumental scale.

And then there’s the physical dangers they pose.You need to live on another planet not to have noticed folk who are so focused of their phones that they are totally oblivious to everything around them. I was on a short taxi trip in Benidorm recently when three people at different locations came with a whisker of being turned into flying mince when they stepped into the path of the taxi. All were too preoccupied with their mobiles to watch where they were going, and got really upset when the driver screamed ‘idiotas’ at them.

In 2015, the German online dictionary Langenscheidt chose the word ‘smombie’ as its word of the year to define define a smartphone zombie, one who is so spellbound by their phone that they have no idea of their surroundings.

And in Israel the ‘phone zombie’ problem reached such serious levels that LED strip lights are now being set into the edge of pavements at pedestrian crossings. When they turn red or green, people with their eyes glued to their phone screens are far more likely to be aware of them than they are of traffic lights.

Now here’s something I bet you didn’t know about phones: they are harbingers of bacteria. Studies published in America in 2015 identified surgeons’ cell phones as a major source of bacterial contamination in operating rooms. Anti-bacterials eliminated germs but within a week the bugs were back. This means that, ideally, phones need to be wiped with a cleaning solution more frequently than once a week.

I reckon that, having allowed my phone to wipe my brain clean, the logical next step is to clean the phone itself from time to time.