A world of opportunity or threat post-Brexit? 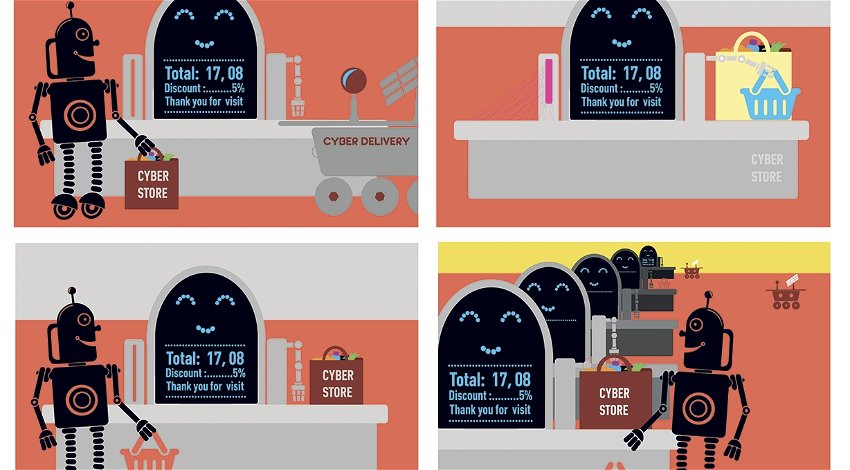 THE British supermarket industry is often praised as the world’s most advanced, generated by decades of intense rivalry.

But when it comes to shopfloor technology, the UK’s lagged behind. In the USA, Amazon’s opening thousands of checkout-free inner-city grocery stores, while Walmart deploys thousands of robots in its supermarkets to reduce overheads and improve operational efficiencies. But is it all good news?

Hear about the faulty robot that caused the recent Ocado warehouse fire and badly hit the online grocer’s sales? Maybe it was arson in retaliation for the conditions it was working under? You know conditions must be bad when even the robots are burning the place down: bloody robots, taking workers’ jobs, spontaneously combusting!

Basically, there’s no getting away from the fact that the age of the robot is already here. It’s just a question of how many there’ll be and how quickly they’ll replace humans. (But hang on! Don’t they already run the civil service, the public sector – and the EU?)

According to international research from consultants Deloitte, 38 per cent of companies expect automation to eliminate certain jobs within the next three years. But even jobs that aren’t eliminated by Artificial Intelligence are likely to be altered by its involvement. And according to the World Economic Forum last year, by 2022 – just three years away – 54 per cent of all employees will require significant reskilling and upskilling.

But if all the lower-skilled jobs – shelf-stackers and cashiers in supermarkets pushed aside by robots racing around like whippets on steroids, for example – are replaced, what will people have to live on?

Reminds me of the story of the president of the US Autoworkers union talking with Henry Ford over automation. Ford boasted how his new automated production machines never went on strike, worked 24/7, never asked for a pay rise, and didn’t need a union. The Autoworkers president asked Ford how many of Ford’s cars the machines bought.

The problem will be this: no workers… no wages. Who’ll buy the goods? Let’s hope they’re building a robot for that as well!

Nora Johnson’s psychological crime thrillers ‘The Girl in the Woods,’ ‘The Girl in the Red Dress,’ ‘No Way Back,’ ‘Landscape of Lies,’ ‘Retribution,’ ‘Soul Stealer,’ ‘The De Clerambault Code’ (www.nora- johnson.net) available from Amazon in paperback/eBook (€0.99/£0.99) and iBookstore. All profits to Costa del Sol Cudeca cancer charity