Bask in Luxury in the City 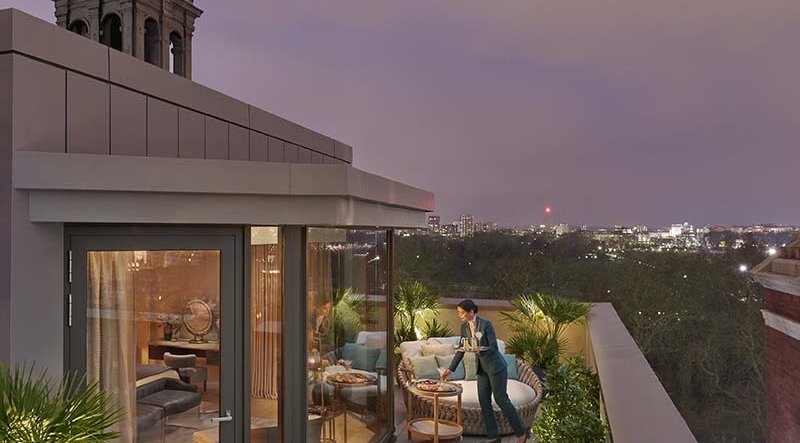 IDEALLY placed facing on the one hand Knightsbridge and the shopping district of the Brompton Road with Harrods and Harvey Nichols leading the charge and on the other hand overlooking the urban oasis of one of London’s major parks Hyde Park.

The Mandarin Oriental Hyde Park has an immediate neighbour One Hyde Park, a massive contemporary set of apartments one of whose many claims to fame is of being the address of the most expensive apartment in London. Something advance to £100 million.

By the 15 April 2019 the largest and most comprehensive renovation of the landmark London hotel had completed. A 117 year back story; though originally a residence of apartments for well heeled Victorian gentlemen. The site was transformed into an hotel in 1902. Now known as the Mandarin Oriental Hyde Park , signifying not only membership of a select hotel chain but also its location overlooking Hyde Park and its Serpentine Lake, rides and trees in the midst of a major European city. An instant success with royalty, politicians and the leaders of industry and the professions the hotel has maintained its position among the leading hotels of London with more modern celebrities. With of course the occasional interruption , after the Second World War its was briefly pressed into service as the headquarters of a famous military unit the SAS.

The hotel was closed for a time most recently following a damaging fire. Many of the public spaces the restaurants and bars had reopened by late 2018 and now the rest of the iconic hotel has fully opened. To mark this significant moment the hotel is offering an opportunity to “Be the First to Stay” in one of the 181 guest rooms a package available till the end of June. The scale starts at as little as £659 includes breakfast, a welcoming bottle of champagne on arrival and a credit line to spend in the Spa for the health conscious or for the less health motivated in the bars with a range of historic cocktails recommended.

Of course the 40 suites cost rather more. The tiniest suite being a mere 47 square meters in luxurious extent. While the largest is a massive 444 square meters of luxury penthouse at the pinnacle of the hotel with stunning and spectacular views across the park and London. A mega penthouse created by the combination of two huge suites the Mandarin Penthouse and the Oriental Penthouse.  consisting of three bedrooms, three bathrooms and a private dining room kitchens and those views.

In every quest room you will find every amenity while within every suite you will find special and curated additional features ranging from libraries with books selected by the London book seller Heywood Hill to yoga mats for those who appreciate meditation of a specific nature. Though no London ‘destination’ hotel can neglect its spa. The new spa has been resigned by the New York based designer Adam D Tihany and spa features 13 individual treatment rooms, an Oriental suite with two massage beds. With also a Rasul water temple , a room designed for traditional Asante Chinese Medical consultations and treatments.

The hotel has since its earliest days been a coveted destination for special and significant events. Hosting royal parties and glamorous social parties. The hotel’s Ballroom and Loggia has been restored and enriched with 24 carat gilding of original features. Additional artworks and contemporary imagery and eclectic artwork enhance the hotels public spaces. Come stay check out the “Historical Journey Exhibition” a permeant display reviewing the many guests who have also enjoyed the special ambiance of the Mandarin Oriental Hyde Park for more than a century.