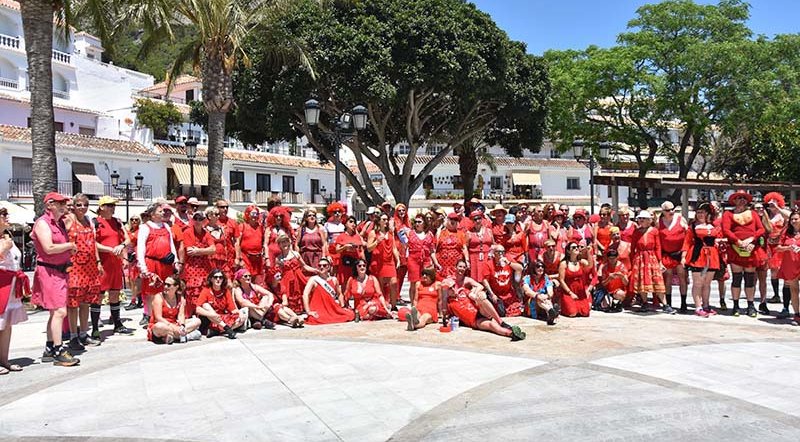 RUNNERS from the Hash House Harriers came from around the world to Mijas today (Thursday) to join the local branch for a run in aid of the Avoi children’s charity.

The group estimated that more than 150 members of the international running club descended on Mijas Pueblo from about 1pm.

It saw them don red frocks and skirts as well as fancy dress and wigs for the three-and-a-half-kilometre walk. Runners came from Britain, the US, Australia and elsewhere for the event.

Jacqueline Watt, of Hash House Harriers, told Euro Weekly News they chose to support Avoi because it is a ‘fantastic’ cause.

“We choose a charity to support every year and we’re hoping to raise about €5,000 for Avoi with the Red Dress Run,” Jacqueline said.

The Harriers walked in aid of Avoi, a charity which works with young patients in Malaga Maternal and Children’s Hospital.

The charity recently finished building a new bone marrow Magical Kingdom-style ward in the hospital, the first of its kind in Spain. The theme is designed to make children’s stay there more enjoyable.

It comes as the Hash House Harriers’ Mijas branch is celebrating its 30th anniversary this year.

Juan Carmona, president of Avoi, told Euro Weekly News the Harriers decided to support them after visiting their wards in the Malaga hospital.

“They have run for us twice already this year and it has all helped to build the bone marrow ward,” the president added.

Members of the Harriers take comedy nicknames when they join the club. One of them, Aitch, told Euro Weekly News she had been a member of the club for 24 years.

Another member, Hash name From Behind, told Euro Weekly News the Harriers were founded in 1938 by British people stationed overseas during the colonial era.

The club now has branches in 196 countries. Members frequently journey across the world for events and to meet other Harriers.

One of those there today, Tight Fit, came from Phuket in Thailand. Another, Bubble, travelled from Dallas, Texas in the US.

“This is our first time on the Costa del Sol and we love it,” Bubble said.

Two Jugs, from Toronto in Canada, said he joined the Harriers in 1994 after running with them while on holiday on the Costa del Sol.

“I thought I had to come back this year to take part with my mother Hash branch,” he said.

Jacqueline said new members to the club are always welcome.

“We run every Sunday and everyone is welcome,” she said.