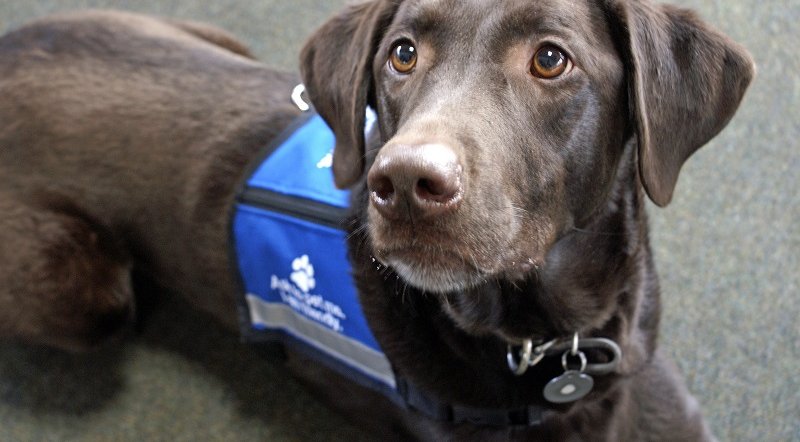 Therapy dogs are to be introduced in a Scottish Airport. Credit: Shutterstock

A Scottish airport’s about to introduce the first full-time therapy dogs in the UK travel industry to calm anxious passengers. There are already more than 50 animal therapy programmes in airports across America, including one, at San Francisco International, featuring Lu Liu the pig.

Though not all airlines are sympathetic. Last year, a woman was refused permission to bring Dexter, her emotional-support peacock, on board a flight to Los Angeles. But it’s not just at airports that you come across “therapy” pets. They’re now in the work place, schools and hospitals.

An interesting idea, but doubtless there’ll be protests, demonstrations and angry letters to papers in the cause of “animal-slavery”, certain religious objections (let’s not go down that avenue) and allergy –

“if they bring cats in, I’ll scream and scream until I’m sick” as someone about to go the full (“Just William”) Violet Elizabeth Bott might put it.

With the imminent approach of the 75th anniversary of D-Day, I often wonder how those who fought and survived the atrocities of the Second World War managed without all these therapy “aids” seemingly deemed “essential” today.

I can’t help asking myself whether the high levels of stress and mental illness experienced by millennials nowadays in any way coincide with living in such a risk-averse culture that they’re forbidden all kinds of emotionally satisfying activities and experiences.

Taking risks—like jumping into a pool or climbing a tree—plays a significant role in confidence building for kids. When they learn to swim or ride a bike – learning to feel what it’s like to master something – it has positive effects that spill over into other aspects of their life.

Incidentally, a friend of mine has a large Rottweiler. Though she (the dog!) has a calm, placid temperament, she’s so threatening-looking, she’d have zero therapeutic effect on anxious passengers. Quite the opposite! My own little toy poodle would get so stressed she’d need her own therapy dog to recover…

Whatever next? Transgender dogs? Would they, in turn, need therapy adults? Blame it all on Brexit – it’s gone to the dogs!

Nora Johnson’s psychological crime thrillers ‘Betrayal’, ‘The Girl in the Woods’, ‘The Girl in the Red Dress’, ‘No Way Back’, ‘Landscape of Lies’, ‘Retribution’, ‘Soul Stealer’, ‘The De Clerambault Code’ (www.nora-johnson.net) available from Amazon in paperback/eBook (€0.99;£0.99) and iBookstore.All profits to Costa del Sol Cudeca cancer charity