Day grannie got to grips with rips 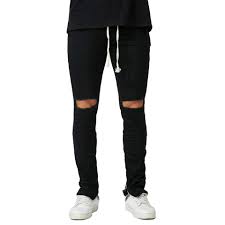 ‘Blimey, did you just have a run-in with a grizzly bear?’ I asked my mate Brent when he ambled over to my house for a drink and a smoke.

I posed the question because his jeans had about as many holes in them as an Emmental cheese. His scornfully retorted. ‘Don’t you read the fashion magazines? Ripped jeans are the in-thing this year, and I’ll have you know that these are a designer pair that set me back 120 quid.’ That was back in the late 80s and all I could do was shake my head in disbelief.

Paying that much for a garment that looked as if a pair of pit bulls had viciously fought to possess it seemed beyond bonkers. (Nowadays that amount is chump change. In 2011, after ripped jeans – now called ‘distressed’ denim – came back into fashion, they were being sold by designers such as Diesel and Balmain for £1,800.) A month later, I saw Brent again, this time wearing an older, more conventional pair of Levis. When I asked him what happened to his expensive designer pair, he said they’d been utterly ruined by his grandma. ‘I went to visit her in Cardiff and she offered to do a wash for me when I was down at the pub. When grannie saw the jeans in the pile of clothes I handed to her, she sewed up all the holes.’ Laugh? I could barely stop.

Brent meanwhile kept banging on about having an interfering old bat for a nan. I said that I’d happily attack his Levis with a garden fork and a hoe and maybe even a cheese grater to bring them up to a fashionable level, but he just stomped off in a huff. Not long after, I went shopping for a new pair of jeans, and was appalled that the ripped look had taken root in every store I visited. Reluctantly, I tried on one pair that only had rips at the knees, but on vertically-challenged me the holes were much closer to my ankles, and looked beyond ridiculous.

Until the fad passed, I only bought non-holey jeans from charity shops. But ripped jeans are now back – and denim jackets too. I discovered this when the temperature in Benidorm unexpectedly plummeted while I was out one evening last week, and my teeth began chattering. So I ducked into a local branch of Zara, which normally has a great range of casual jackets, but the only one that fitted me looked as if it had been spat out by a combine harvester – or used as target practice by a maniac with a double-barrelled shotgun. But I bought it anyway, and it did a great job of taking the edge off a chilly night.

Better than that, friends told me how good I looked in it. My one regret is that the jacket wasn’t made by the Japanese company Zoo Jeans, which wraps denim around tyres and throws them to lions, tigers and bears to claw and chew at the Kamine Zoo in Hitachi City.

Once the animals are done ripping the denim, the cloth is then turned into garments that sell in the region of £1,000. (See the video at https://youtu.be/3phbUZzJQbw.)