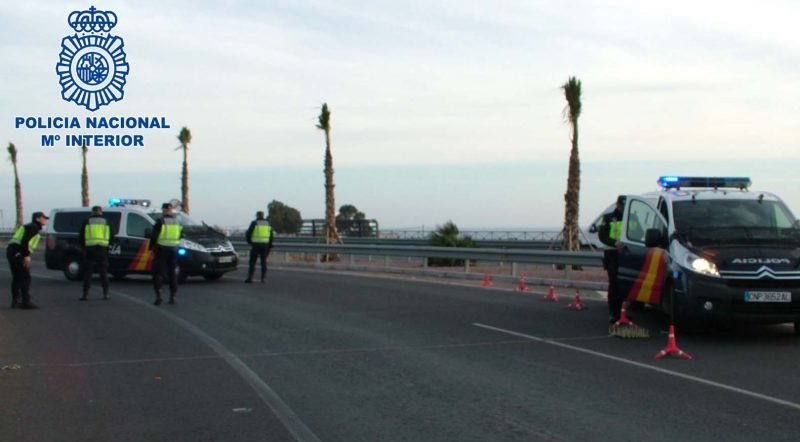 A suspected thief is in police hands after managing to evade arrest twice in the same week.
Police finally cuffed the 39-year old when he was stopped on the outskirts of Almeria city in a taxi shortly after a mugging in Aguadulce which the authorities believe was his work.
The search for G.H.M. began in the early hours of May 27 when he made off to avoid being pulled over in an ID check in the provincial capital. Knowing the driver of the vehicle in question did not have a driving licence, officers went after him supported by other police units.
After several minutes they came across the vehicle, abandoned, and with clear signs it must have been stolen. There were no signs of the driver.
Four days later officers spotted the suspect driving another vehicle. To prevent him from taking off once more they blocked the road with a police vehicle. Ignoring police instructions to stop, he instead repeatedly rammed the police car before shooting through at high speed with, police reported, a complete disregard for the safety of pedestrians and other motorists.
The following day a woman called 091 to report her bag had been snatched in Aguadulce, the muggers making off in a car in the direction of Almeria. Given the indications it was G.H.M. who was responsible for the crime, the police set up controls at the entrance to the city.
When officers stopped the suspect in the taxi they found the smartphone and the €88 stolen in the Aguadulce mugging.
Police hit the 39-year old with a series of charges, among them vehicle theft, criminal damage, and violent robbery.