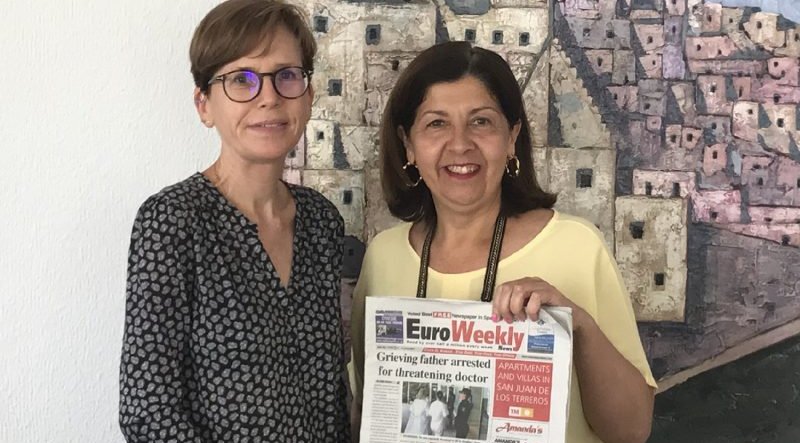 Rosa Maria Cano starts her fourth term of office as Mojacar Mayor, telling EWN the residence for the elderly and the extension of the bypass are top priorities. CREDIT: Mojacar Council

ROSA Maria Cano has good reason to look pleased. As head of the Popular Party candidate list for Mojacar in the recent municipal elections and Mayor for the last 12 years, she must feel great satisfaction the PP emerged the clear winner, taking over 57 per cent of the vote and increasing its absolute majority in the local council.

Speaking exclusively to the Euro Weekly News as she starts her fourth term of office as Mojacar Mayor, Rosa Maria put the electoral success down to her administration’s track record.

“The evaluation by voters, or all of Mojacar, is based on what you promise and what you have accomplished. Our voters, and those who didn’t vote for us, see that over the last four years this government team has provided answers to the municipality’s needs”, she told EWN.

The Mayor stressed she was not only referring to visible achievements, but also “the involvement we have with residents”, although there is quite a list of improvements and additions to the area’s infrastructure and facilities, she pointed out.

Upgraded street lighting, children’s play areas, newly created plazas in the village, a covered area for the bowling green, a skate park and Calistreetnia outdoor exercise equipment for youngsters are good examples, Rosa Maria commenting, “we’ve tried to do things for all ages and interests.”

The Mayor was keen to underline though that “needs often aren’t just works, but also social services.

“We pay particular attention to the elderly, British and non-British. But perhaps the British don’t have family here, or they are very old, and it’s difficult for many of them to go out to deal with paperwork or administrative matters. What we do is make it easier for them to stay in the municipality as long as possible without having to turn to a residency.

“We are not distant”, she added.

“We try and resolve anyone’s problem. This is often very difficult, but to the best of our ability, we use all the resources at our disposal; we even get personally involved to help.”

“We also have a British councillor who is at the Town Hall every Thursday from 8am to 3pm for any municipal administrative matter, although often he helps out on other issues people don’t know how to resolve.”

Rosa Maria is clear when it comes to the priorities for Mojacar over the next four years.

Getting the residency for the elderly up and running is, the Mayor said, one of the most important projects. The works are at “a very advanced stage”, and should be completed by the end of October, she reported, at which time the council will be able to start the process of requesting the Junta de Andalucia subsidizes half the 60 places so they are available for people with limited financial resources.

A bypass running from the service station to Cuevas del Lobo with roads cutting down to different points along the main coastal drag to address traffic congestion is another important plan the local council is working on, as is a new water treatment plant to replace the existing one built 30 years ago.

An additional medical centre located close to the petrol station which provides specialist services like X-rays and physical therapy for which residents currently have to travel to other municipalities is a further project for the next four years. A bus station is something else the municipality lacks, the Mayor commented.

Despite her four consecutive electoral victories, Rosa Maria has decided she will not stand again as Mayor. She told EWN, “I’m going to work in the next four years with the enthusiasm with which I’ve always worked. But I will have been mayor for 16 years when this legislature ends and 36 years in politics, so I think it’s time we must make way for younger people.”

“I don’t say I’m going to completely leave politics”, she added however.

“And of course whoever does stand will have my full support and my work behind them.”

This weekend the local council, along with the whole of Mojacar, will live and breathe the Moors and Christians festival, the municipality’s biggest, and loudest, public event of the year.

It is, according to the Mayor, “a fiesta unlike any other.”

“There’s a large group of people who live here who organise all the events. The council collaborates: putting up stages, financially. But the part you can’t quantify financially is the work of all the Mojacans.

“This fusion of the Town Hall with this large number of people makes it possible. So it’s really everyone’s fiesta, because we all take part.”