An adrenalin high after man cycled 1,500 miles to Mojacar for Cancer Research UK 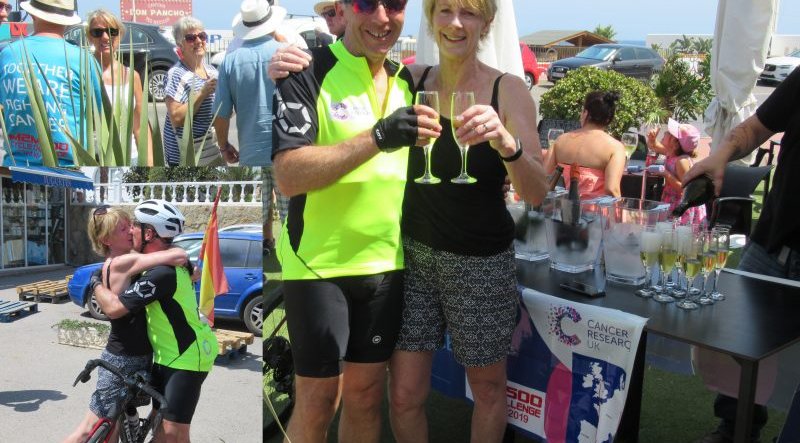 Ian’s wife Pam surprises him at journey end, where the couple celebrate a successful end to a grueling challenge.

“AN adrenalin high” was how Ian Hunter described his feelings when he made it to Mojacar last Thursday following a 1,500 mile cycle to honour the memory of his late mum Joyce and to raise money for Cancer Research UK.

Not only did 65-year old Ian successfully complete the formidable challenge of pedaling from Morecambe to Almeria in just three weeks, he smashed his target of raising £5,000 for the cancer charity: the final total is set to be over £6,000.

Kicking back after his incredible endeavor, Ian told the Euro Weekly News, “This is what I’d been talking through in my mind when I was training and cycling here, and here was the reality.”

One thing Ian hadn’t prepared for was the surprise his wife Pam had in store for him. He was, he said, “stunned and overwhelmed” to find her waiting for him when he reached the final stop and not back in Lancashire as she’d had him believe.

Incredibly Ian only took up cycling in 2017 after a health scare. He quickly caught the cycling bug. Then when cancer claimed Joyce’s life last year he came up with the idea of the fundraising ride to Mojacar, where he and Pam have had a holiday home for 14 years, and where Joyce visited them many times.

With daughter Carol supporting him on the UK leg and friend Chris Halls accompanying him all the way in a support car, Ian averaged about 75 to 80 miles a day.

Ian had trained with a cycling coach to prepare physically for the challenge, but admitted he’d had a few doubts before he set off.

“The most I’d cycled before back-to-back was five 50 mile rides and one 80 mile ride, so I didn’t know how I was going to cope”, he said.

As it turned out the training paid off.

“I was really pleased with the way my body stood up to it, but it got mentally tough at times and it was fighting that”, he revealed.

Ian’s lowest point was going over the Pyrenees. Having built himself up for what would inevitably be a tough day, dismal, wet weather made the ride up the mountain road even harder. By the final 10-mile climb he had a strong wind against him too. He kept going all the way to the top, only for a mighty gust of wind to flip him over. Fortunately he only suffered a few bruises, and could enjoy the “real high” of getting a major obstacle behind him.

Boredom was an issue on straight runs through unremarkable landscapes, but there were other days going through small villages and spectacular scenery which Ian described as an “absolute joy.”

Arriving in Poole on the south coast was another high point Ian said. “It was the psychological barrier of getting the first leg done.”

What really kept him going the over the three weeks Ian said was thinking about why he was doing such as an epic bike ride.

“I just had to switch onto the Cancer Research UK wristband the Lancashire fundraising manager Vikki Bassek gave me when I set off and focus on that.”