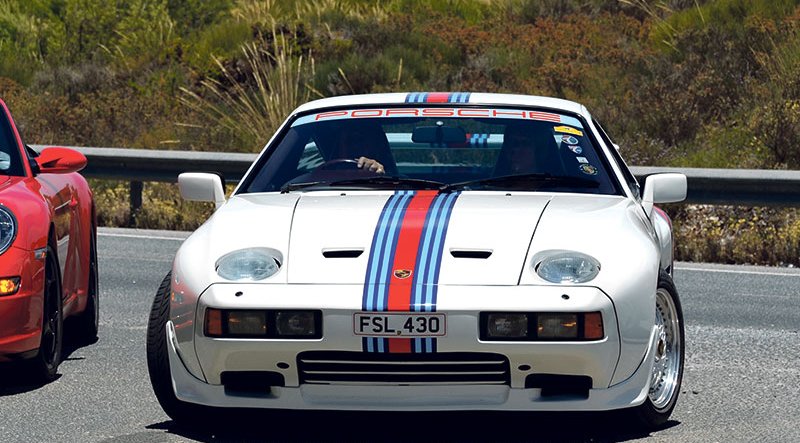 The stunning Martini Porsche 928 of Franco and Kim Subbiani.

Anyone turning up at the start of the CCCA’s June classic car run could well be forgiven for thinking they had arrived at the start of a major International event.  Almost 100 people, 50 cars, all grouped together at Venta Los Morenos last Saturday near the Coin – Alhaurin intersection.

There was an amazing selection of classic, modern and modern classic cars from a number of different countries, proudly sporting their national registration plates and adding to the International feel of this fabulous event.

Entries came in from far and wide, as well as the regulars, but all were full members of the illustrious CCCA!

Event organiser, Ian Giles, was surprised by the number of enthusiastic people who had arrived to enjoy breakfast whilst going through the registration process before the 11.00am ‘off.’ The start was delayed around 15 minutes simply because of the volume of people, although the entire registration process was ably managed by Club ladies Jane Jackson, Marilyn MacPherson and Angela Sharp without whom these events could never happen!

The waiting cars provided much interest for participants and spectators alike, drawing large groups of enthusiastic people to gaze at such things as the Dodge Viper and Corvette C6 of Arnie Hille.

The USA was well represented with the huge American pick-up, a Chevrolet SSR, which was perhaps the most unusual vehicle to participate and were just as popular as the two beautiful  red Ferrari 430 Spyders and the very rare Lotus Evante of Haig Oundjian.

Mercedes are always popular cars for this type of event as they are usually reliable, comfortable and can eat up the kilometres. Several were present and possibly the prettiest was the bright red 1964 SL250 Pagoda model of Steef and Ardie Doekemeijer.

Two identical 230 CE Coupe Mercedes were present, one entered by regulars Simon and Andrew Buck-Honour, the other by Club Presidente and organiser, Ian Giles, who brought his out only because his Triumph TR8’s battery had cried enough just before leaving for the start.  A shame as it was the first time the car would have been out of its storage area in over four years!

A beautiful Porsche 928GTS finished in Martini colours was driven by Italian Franco Subbiani and navigated by his lovely wife Kim, whilst father and son team, Peter and Peter Noble, had a stunning bright red 911 convertible which they had just driven back from Portugal to make the start in time.

New member, Arthur Richardson brought his gorgeous 1987 Rolls Royce Spirit II, a left-hand drive model that has covered a mere 29,000 kilometres from new and still has some of the plastic coverings from delivery on the seats! A real beauty! Jaguars too are always a good choice, and the Club boasts Jaguars of almost every model, but it was lovely to see several Jaguar E-Types which gathered a great deal of attention, as did the brace of more modern XKR’s in the hands of Jack Weiss and Andre Vileleers.

Once the crews were able to get away they headed for the A-355 towards Pizarra and then turned off to Alora and on past the reservoir and dam at the village of El Chorro. Here the route went past the Caminito del Rey where the spectacular gorge can be seen and also the railway line where the famous Frank Sinatra epic ‘Von Ryan’s Express’ was filmed in the 1960s. From here the route went on to the lakes of El Chorro where coffee was taken and many appreciative Spaniards and tourists alike enjoyed seeing the cars at close quarters.

Onwards over the bigger dam and then the route turned off through the pine woods to head north towards Campillos and then circling around the north of the lakes to head back through Ardales, passing Carratraca, whilst heading down the fast A357 towards Malaga and then rejoining the A-355 to head towards Coin, Alhaurin and Mijas.

A regular tradition of these events is the cava stop.  Essential maintenance for hot and grubby crews (well, not all fit that description but some in the really old, open top cars would!) this is something that is now expected but much enjoyed and took place near Barranco Blanco, famous as the area that many Germans were taken to settle after the end of the Second World War.

Now quite a local beauty spot and very popular with both tourists and locals.   The organisers were there ready with the chilled fizz just before the first cars arrived and dispensed the lot from a portable table into plastic glasses.

From here the route came back past the start at Venta Morenos and on towards Mijas passing Valtocado on the way, then passing Mijas Pueblo before going on down the hill, over the AP-7 Autovia and turning into the famous, and fabulous, Da Bruno’s restaurante in the Danish Centre there.

Chilled Prosecco and hot pizza awaited the hungry crews who enjoyed that and a good old chat with pals old and new before sitting down to a really excellent three-course lunch put on by Da Bruno’s.

With the weather being so good, the scenery and roads so spectacular, the company, food and wines so enjoyable and the route instructions so professionally done, it was decided by most everyone that life here on the Costa with the Classic Car Club of Andalucia is indeed pretty good…

The next event for the CCCA is its famous annual Summer Ball to be held at the Tamisa Golf Hotel on Saturday, June 22.  If you would like to attend, contact Club vice-Chairman Brian Ladd via email on [email protected]

Until the next time, Ian Giles